Shane Beamer is an American football coach currently serving as the head coach of the University of Soth Carolina. Earlier, he worked as an assistant coach for Oklahoma, Georgia, Virginia Tech, South Carolina, Mississippi State, Tennessee, and Georgia Tech.

Charleston, South Carolina native, Shane Beamer was born on 31st March 1977, under the star sign Aries. The forty-four years old holds an American nationality and is of white ethnic background.

How Much Is Shane Beamer's Net Worth?

Beamer is the 58th-highest-paid coach in the country. His five-year $13.75 million contract with South Carolina pays him a $2.75 million annual base salary.

Besides, the first-time head coach can have various bonuses based on the team's play ranging from $200,000 for reaching the Southeastern Conference title game to $1 million for winning the national championship.

“I'm making more money than I ever could have dreamed I'd be making,” Beamer said.

Shane Beamer is the son of Cheryl and Frank Beamer. He was born when Frank was defensive line coach for the Citadel Bulldogs.

When Shane turned 10, his father became the head coach of Virginia Tech, and the family relocated to Clarksburg, Virginia.

Shane enrolled at  Blacksburg High School where he played football and baseball. Further, he played at Virginia Tech. Coming into his love life, Beamer is married to Emily with whom he shares three children.

In 2004, Beamer was appointed to coach cornerbacks at Mississippi State.

In 2006, he became the recruiting coordinator and brought in a class that included Anthony Dixon was drafted by the San Francisco 49ers in the 2010 NFL Draft and also played for the Buffalo Bills.

In 2007, Beamer joined the University of South Carolina to coach outside linebackers as well as the special teams' coordinator.

In 2011, Beamer was hired by Virginia as the running backs coach. In his debut season, he coached the school's single-season rushing record holder, David Wilson who was drafted in the first round by the New York Giants. 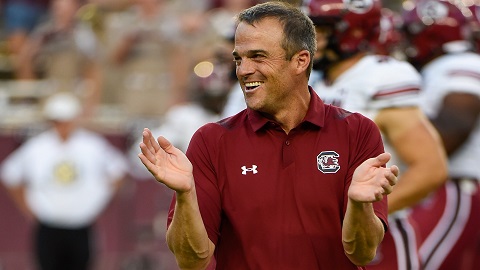 On 5th January 2016, Beamer was appointed the tight ends coach and special teams coordinator at Georgia. There he coached several future NFL stars including Rodrigo Blankenship and Charlie Woerner.

On 22nd January 2018, he was appointed the assistant head coach under Lincoln Riley.
On 6th December 2020, Beamer was named the new head coach of South Carolina. In his debut season, his team finished  6-6 in the regular season. He concluded the season with a 38-21 win against  North Carolina in the Duke's Mayo Bowl.