Sephora Coman and her former Husband Kingsley Coman are Divorced Now; Their Married Life and Children

Kingsley Coman, a French professional footballer who plays as a forward or winger for Bayern Munich and the France national team, is divorced from his former wife Sephora Coman also known as Sephora Goignan. Besides his impressive performance on the field, Coman was on the spotlight for his controversial relationship with Sephora.

Here are all the details about their married life, children, divorce and many more. Let's get into the article of Kingsley and Sephora without wasting any further time.

There is not much information about Kingsley and Sephora relationship status. However, Sephora Coman has mentioned herself the wife of Kingsley in her Instagram bio which is not in use now. She also has shared a few pictures with her husband. 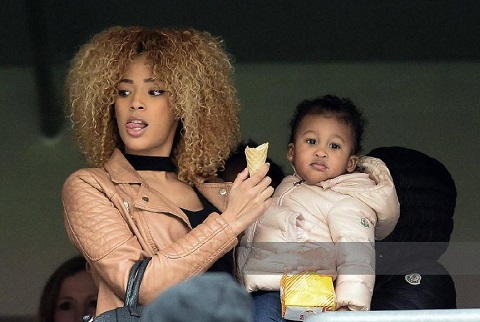 The star has not revealed anything about her career and professional life. Since she is a model and a former wife of high profile player she might earn huge amount of money for herself.

The couple together has a daughter as one of the players named Bayern shared a picture of Sephora with a baby girl and captioned it "Kingsley Coman's wife Sephora and daughter at yesterday's game." Coman and his former wife Sephora have a young daughter named Leyana.

Like many other celebrities, Coman family is also not free from controversies and scandals. Breaking news from France has revealed that Kingsley Coman was taken into custody after two violent altercations with his spouse Sephora Coman in mid-2017.

The couple was in the midst of an acrimonious separation. According to police reports, two separate incidents occurred at his spouse’s residence in Seine-et-Marne outside Paris. The football player was taken into custody after Sephora Coman called the police on.

He was questioned by police for several hours and reportedly acknowledged the facts for disputes between the couple. The reason for their dispute was allegedly about an advertising contract that Coman was unaware of. Kingsley was fined €5,000 after found guilty of assault.

As for now, both the parties are quite low-key about their personal life. They are already separated and living their single life with a seecret personal details.

Who is Sephora Coman? Her Bio, Wiki & Parents

As mentioned above she is the wife of a popular football player Kingsley Coman.  Her husband plays for Bayern Munich and the French national team. He has been described as one of the biggest talents in European football. The details about her date of birth and birthplace are missing for now.

Similarly, no one knows about her early life and educational qualification. As for now, she is a model. Sephora is currently under contract with Parisian agency Rixon. Not only that but she also hasn't anything about her parents.

However, her husband was born on June 13, 1996, in Paris. Coman started his career when he was just six years old, joining US Sénart-Moissy in 2002. Later, he joined Paris Saint-Germain in 2004.

Her husband made his senior debut when he was only 16 years old, appearing in three games for Paris Saint-Germain. Furthermore, he signed with Juventus in 2014 and has also played for Bayern Munich on loan.