Sean O'Malley is an American professional Mixed Martial Arts (MMA) fighter who is signed to Ultimate Fighting Championship (UFC) under the Bantamweight division. A professional since 2003, he has compiled a record of 12-1-0 (win-loss-draw), and competed widely at Intense Championship Fighting as well as EB: Beatdown and LFA, before joining the UFC in late 2017.

How Much Is Sean O'Malley's Net Worth? Know His UFC Career Earning

UFC bantamweight Sean O'Malley has an estimated net worth of $1 million. The significant source of his income is his MMA career. Signed to UFC, he gets paid a base salary on fight night no matter if he wins or loses, and has a Rebook sponsorship however there is typically a win bonus for the winning fighter. Further, there is also a fight of the night bonus.

Further, he is sponsored by Sanabul, Manscaped, and King Palm. Besides, he owns a few lists of cars including Ford.

When it comes to his love life, Sean O'Malley is not shy to flaunt his love in the public. He often posts beautiful pictures with his girlfriend, Dany, a professional hairstylist. 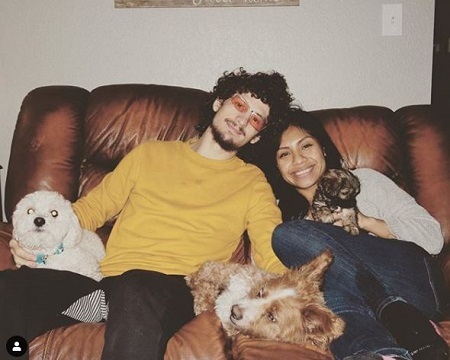 Sean O'Malley with his girlfriend and their pets SOURCE: Instagram @sugaseanmma

Scrolling through his Instagram, Sean came public with his relationship in 2016. Since he is regular with lobby-dobby pictures.

On 1st December 2017, O'Malley made his promotional debut at The Ultimate Fighter 26 Finale against Terrion Ware. He won the bout via unanimous decision. In the following match, he defeated Andre Soukhamthath at UFC 222 on 3rd March 2018.