Sean McDermott is an American football coach who currently stands the head coach of the Buffalo Bills of the National Football League (NFL). Earlier, he served as an assistant coach for the Philadelphia Eagles and Carolina Panthers.

Omaha, Nebraska native, Sean McDermott was born on 21st March 1974, under the star sign Aries. The forty-six years old holds an American nationality and is of white ethnic background.

How Much Is Sean McDermott's Net Worth?

Into coaching profession since 1998, McDermott has summoned tremendous sum through his career. As of 2020, his net worth is over $3 million. Currently, he is under a six-year contract with Buffalo Bills, however, his contract and salary are yet to disclose. 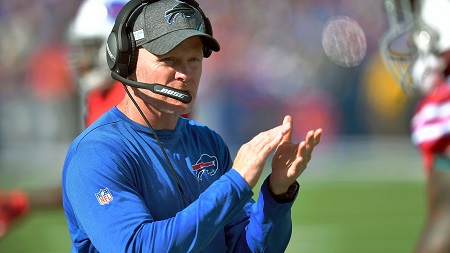 According to the source, the median salary of an NFL head coach is $6 million to $7 million. Hence, he ranks 16th best paid in the list, his annual income is around $2 million per annum. Bill Belichick, Pete Carroll, and Jon Gruden are hit the 1st, 2nd, and 3rd in the list of highest-paid NFL Head Coach.

Sean McDermott's Wife. Is He Married?

McDermott is a married man. He exchanged the vows with his girlfriend, Jamie a long time ago and now shares a son and a daughter. Currently, the family resides in Orchard Park, New York. 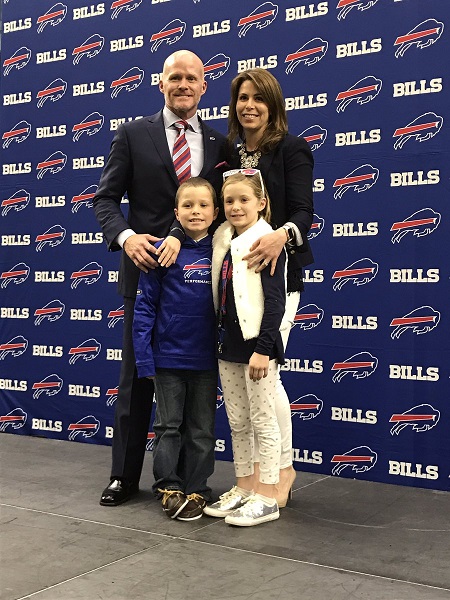 A matter of fact, McDermott is a quite confidential person when it comes to his personal life. He has not shared much information regarding his family to the public as well as nowhere to be found on socials such as Instagram & Facebook, but has a twitter account.

Sean was born to American parents, however, he has disclosed information about his father, mother, and siblings.

Sean did his high schooling from La Salle College High School where he was defensive back as well as a national prep champion wrestler. After graduation in 1993, he attended the College of William and Mary, earning a bachelor's degree in finance.

In 1998, McDermott started his coaching career at William & Mary as a graduate assistant. In 2001, he originally joined Philadephia where he went through the various positions from assistant to head coach to secondary coach to Linebackers coach. On 15th January 2011, he was fired as the defensive coordinator.

On 17th January 2011, McDermott was hired by the Carolina Panthers as the defensive coordinator. In 2015, he was awarded the Defensive Coordinator of the Year award.