Sean David Grande is an American television and radio sportscaster who currently provides play-by-play coverage for all Boston Celtics radio broadcasts. Known as the voice of the Boston Celtics he has called virtually every sport over a 25-years of career. As of August 21, 2020, he called his 2,000th in the NBA Playoff Bubble.

New York native, Sean Grande was born on 11th December 1971, under the star sign Sagittarius. The forty-nine years holds an American nationality and is of white ethnic background. He is a graduate of Boston University.

It's been three decades that Sean Grande has been serving as a sports broadcaster. With prominence, he has earned a tremendous sum of money throughout his career. Since 2001, he is signed with Boston Celtics as a broadcaster but none has revealed the financial info such as contract and salary between them. Further, he also works for Fox Sports.

As of 2021, it is believed that Sean makes no less than the six-digit figure per annum as salary. Further, his net worth is $1 million.

Sean Grande's Wife: Is He Married?

Sean Grande is married to an American host and correspondent, Dana Jacobson. His wife currently serves as a co-host for CBS This Morning Saturday.

Grande and Dana met around 2010 and were in a relationship for roughly two and a half years before tying the knot. They engaged in 2018 and exchanged the vows in September 2019. 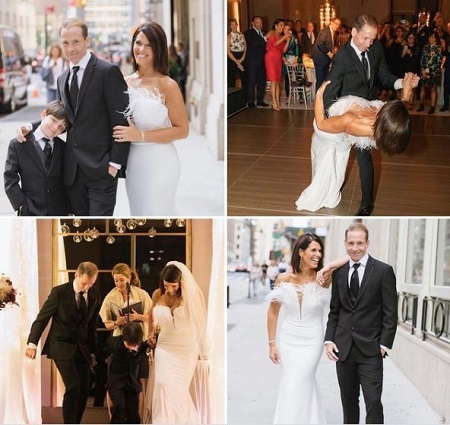 Dana shared a series of their wedding photography and also wrote on Instagram “Marrying the love of my life and becoming a stepmom to love in my life I never knew possible AND getting to do the things I love to earn a living … Wow. If I’m dreaming don’t wake me up!”

Sean Grande started his broadcasting career in 1991 at WEEI where he served until 1998, the final three years as Sports Director. In August 1988, he joined Minnesota Timberwolves. After leaving Timberwolves, he joined the Boston Celtics as a broadcaster (September 2001 - present).

In April 2013, he arrived at Boston Red Sox in April 2013 but worked there for 7 months only. In January 2014, he was hired by the CBS Sports Network. While still working there he worked for Spike TV from July 2015 to June 2017, where he took over as the announcer for Bellator MMA. He left CBS to join Fox Sports.