Scott M. Kingery or simply Scott Kingery is an American professional baseball player who plays as an infielder as well as an outfielder for Major League Baseball team, Philadelphia Phillies. Before playing for Philadelphia Phillies in the major league, he played for the University of Arizona.

How Much Is Scott Kingery’s Net worth and Salary?

Looking at his rising income and salaries, his present current net worth is assumed to be above $ 2 million which is inevitably to increase in the future.

Currently 24, Scott Kingery stands at a height of 5 feet 8 inches tall and weighs around  82 kg. Talking about his personal life, it was reported that Scott Kingery is in a relationship and dating his girlfriend, Kaylee Gambadoro. 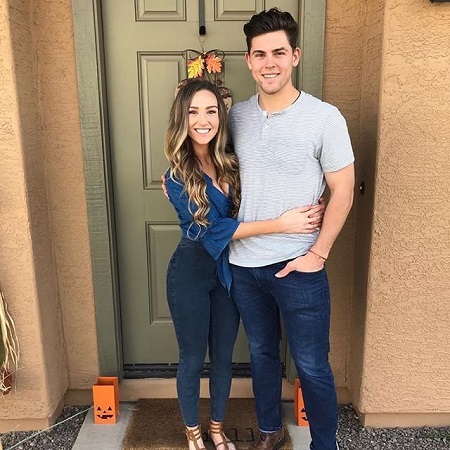 She is the daughter of Arizona sports talk show host, John Gambadoro. The pair seems to enjoy life and spending time with each other as they are often seen posting their pictures on Instagram.

However, as of September 2019, he has deleted all the pictures with Kaylee Gambadoro on Instagram. Hence, they are assumed to have broken their relationship. But none of them have openly talked about separation yet.

Scott Kingery belongs to the white ethnic group and is an American national. He was born on April 29,1994, in Phoenix, Arizona. He started playing baseball with Little League Baseball and did his schooling from Mountain Pointe High School in his home state of Phoenix, Arizona.

It is interesting to note that Kingery has an identical twin Sam Kingery who played on Mountain Pointe baseball team and went to Northern Arizona University as a freshman but could not make to the major leagues.

He was later picked as the 48th selection in the second round of the Major League Baseball 2015 draft. Kingery signed a $1,259,600 as a signing bonus and played at the minor leagues. During his minor playing years, he was voted as the top minor hitter and also won the minor league Rawlings Gold Glove Award.

It was revealed that he had signed a six-year contract on March 25, 2018, guaranteed worth $24 million which was the highest guaranteed sum which could to rise to $65 million.

He made his debut against Atlanta Braves and scored his first hit in the match. Kingery hit his first major league home run against Cincinnati Reds. His famous teammates include Drew Smyly, Zach Eflin, and Bryce Harper.