Zach Eflin is an American professional Baseball player who plays in the Major League Baseball (MLB). As of 2019, Zach Eflin currently plays for the Philadelphia Phillies as their Pitcher. Previously, he played for San Diego Padres.

As a Pitcher, Zach Eflin reportedly earns around $535 thousand as his yearly salary from Philadelphia Phillies. Further, Zach Eflin has an estimated net worth of over $1 million. He is currently dating his girlfriend Lauren Dennen.

Zach Eflin was born on April 8, 1994, in Orlando, Florida to parents Larry and Catherine. As per his nationality, he is American and belongs to White ethnic group. Further, his star sign is Aries. He grew up along with his 3 sisters. 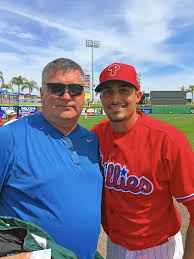 CAPTION: Zach with his dad SOURCE: The Morning Call

Eflin attended Paul J. Hagerty High School in Oviedo, Florida. Eflin had a 0.51 earned run average( ERA) in his senior year and a total of 59 strikeouts in 43 innings.

Zach Eflin Net Worth and Salary

As of 2019, Zach Eflin has an estimated net worth of over $1 million. Further, the MLB player has an average salary of $535 thousand annually while Jake Arrieta is one of the highest earners of the team with an annual salary of $25,000,000.

Additionally, Zach Eflin so far has made earnings of $2,431,622 from his entire MLB career. Furthermore, he is one of the players who receive a salary as a pre-arbitration player with reference to his service time in MLB.

An eligible pre-arbitration player usually earns somewhere around a minimum wage of the major league during the first three years of service."

Eflin's career earnings, including bonus and incentives and contracts

Furthermore, he also makes a considerable amount of money from endorsements, which certainly helped him to collect a satisfactory net value.

Unlike his professional career, he hasn't revealed much about his personal life. The famous MLB star is dating his girlfriend Lauren Dennen as per various sources. He also mentioned about having a girlfriend after signing his contract with the Phillies. 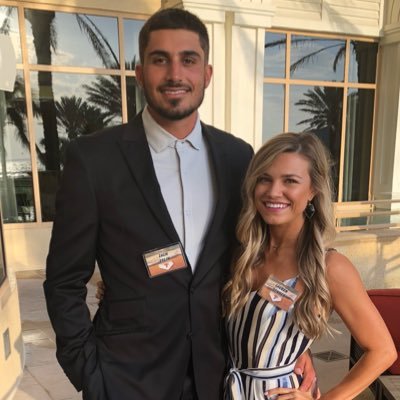 Ahead of his team debut with Phillies, Eflin said:

“They already had [their passports] thankfully. I’m going to have seven people. It was nice finding out a little early so they could all get prepared and let them know. I’ve got my dad, both sisters, my grandparents, my girlfriend, and her brother.”

One of Eflin's three sisters lost her life battling with leukemia.

Talking about his body measurement, the Famous MLB star is 6 feet 4 inches in height and weighs around 98 kg.

After his high school career, the San Diego Padres selected Eflin in the first round of the 2012 Major League Baseball draft with the 33rd overall selection.

In exchange for Tim Federowicz, Matt Kemp and cash, the Padres traded Eflin, Joe Wieland, and Yasmani Grandal to the Los Angeles Dodgers on 18 December 2014. The Dodgers then traded Eflin for Jimmy Rollins together with Tom Windle to the Philadelphia Phillies.

On April 18, he was recalled by the Phillies to replace Clay Buchholz in the rotation after recovering from knee injury.