Sasha Stefanovic is an American college basketball player who is representing Purdue Boilermakers men's basketball as their guard. As per his current NBA status, he will be eligible in the 2022 NBA Draft.

Son of Lou and Helen Stefanovic. His father, Lou is a former basketball player who played at Illinois State from 1982-85. As a senior, Lou was a second-team All-Missouri Valley Conference honoree, averaging 17.5 points per game. In the 1985 NBA Draft, he was picked in the fifth round by the Seattle SuperSonics.

He has a brother named, Dejan who graduated from Purdue in spring 2017.

At Crown Point High School, Sasha was a four-year letter winner. As a junior, he averaged 12.3 points, 4.4 rebounds, and 3.5 assists as a sophomore, earning NW Indiana Times all-area accolades.

During his senior season, he averaged 20.0 points, 7.0 rebounds, and 2.1 assists per game at Crown Point. Also, he leads the Bulldogs to a 22-4 record and their first league title since 1999. Named an Indiana All-Star following his senior campaign.

On 3rd February 2017, Sasha signed to Purdue Boilermakers for his collegiate career. He spent the first season as a redshirt, so he will have four seasons of eligibility, beginning with the 2018-19 season.

Stefanovic appeared in all 36 games, averaging 2.5 points, 1.1 rebounds, and 0.4 assists per game as a redshirt freshman.

How Much Is Sasha Stefanovic Net Worth In 2021?

Sasha Stefanovic is yet to turn professional and make money out of his basketball career. Not to mention, the college basketball player does not get paid for playing the college team.

However, one can make money from sponsorships and endorsements, thanks to NCAA's new rule. Scrolling through Stefanovic's IG, he is promoting Dutch Farms, Inc.

As of 2021, Sasha Stefanovic's net worth is under review.

Sasha Stefanovic is off the market. The Purdue Boilermakers men's basketball guard is in a relationship with Angela Dukleska. Seems like both met at college. 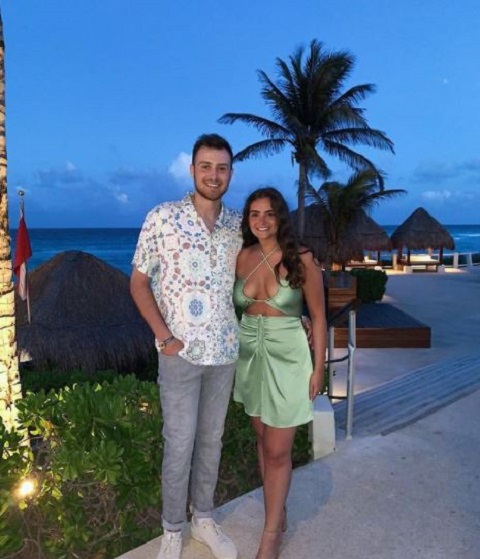 It's unknown when they started dating but Stefanovic made his relationship public in May 2018, sharing an adorable picture with his bae. He captioned the post "Love" with a red heart. Isn't that cute?

Since Sasha and Angela often each other on their respective socials.