Anthony Carelli best known as Santino Marella is a Canadian trainer, entrepreneur, actor, mixed martial artist, and retired professional wrestler. He is currently signed to Impact Wrestling. He is best known for his 11-year tenure with WWE, where he fought under the ring name Santino Marella. Also, he is the founder of the Battle Arts Academy training facility for Canadian martial arts and professional wrestling.

The former WWE United States Champion, Marella is a married man and is in a marital relationship with his long term girlfriend Anna Babij, with whom he shares two children. Additionally, he enjoys a net worth of over $12 million. For more details about his net worth, salary, bio, and marital status, stay with us till the end.

Is Santino Marella Married? Know about his Wife and Personal Life

The man, who rose into the wrestling world when he intruded into the fight between Umaga and Bobby Lasley, is married to his wife, Anna Babij. Reportedly, the couple tied a knot on November 28, 2015.

The couple shares a son and a daughter together named Marko Carelli and Bianca Carelli respectively. Their daughter was born in 1996 before their wedding and their son was born on October 19, 2018. His daughter, Bianca is the winner of Miss Teen Ontario Pageant in 2013. She does announcing works for BattleArts Pro Wrestling Shows

3 years ago today was the day!! Where I fully and completely gave the rest of my life to @annababij, so far what a ride babe, I’m sure the rest will be just as fun/crazy as the first 3, you really are my rock, love u forever, you will always be my girlfriend first, I wish u could feel the butterflies I feel for you each day, you are simply awesome, ur bum is a bonus !!

Talking about his wife, Anna Babij is a sponsored athlete and a fitness trainer. Reportedly, Babij is working at GoodLife Fitness and Sales Manage Magnum Nutraceuticals. Apart from the mentioned fact, there isn't any further information about her in the media yet. However, the duo is enjoying a lavish lifestyle along with their children. 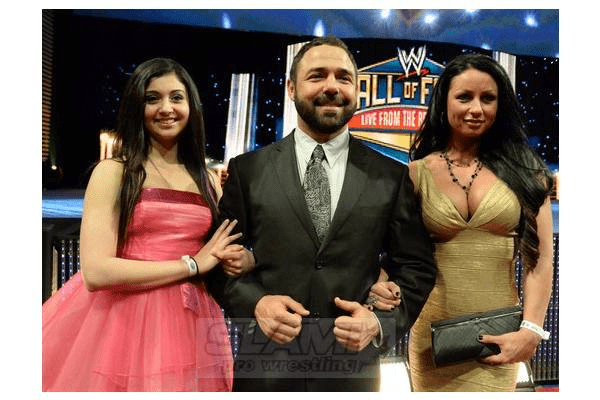 Marella was rumored to be involved in a few relationships before he finally married to Anna Babji. He was linked with Rosa Mendes and Petrina Carelli. However, the detailed information about the relationships is not available apart from the breakup.

Talking about the body measurement, Santino height is about 1.83m and weight is about 227 lbs. Also, he has tattoos all over his body.

How Much does Santino Marella earn in 2019? Know About His Earnings and Net worth

The net worth of Santino Marella is reportedly around $12 million, earning an annual salary of about $419,750. From his multiple profession, he collects a considerable amount of money. Moreover, as he is presented as the brand ambassador for several brands and also earns money from brand endorsements.

In addition, Marella shares a significant amount of money with his wife, Anna. His wife earns a decent sum of money from her career as a fitness trainer and a bikini fitness competitor. So we can assume that the couple shares a massive net worth together.

However, the information about his personal assets such as a house, cars, etc is still behind the rock. Undoubtedly, we can confirm that he owns a luxurious house and cars which he regularly flaunts in his social accounts.

Additionally, with the reference from social accounts, we found that a couple is living a lavish lifestyle along with their children with the earnings from his professional career.

Santino Marella was born in Mississauga, Canada, on March 14, 1974, to the parents whose names are still behind the rock. Further, Santino has Canadian nationality and his racial background is Italian. Further, he has a twin sister namely Santina Marella. Also, his zodiac sign is Pisces.

Santino attended the Catholic primary school of St Basil, and later the Catholic secondary school of Philip Pocock. At nine years of age, Carelli trained in judo and also competed in high school wrestling, winning the Region of Peel Secondary School Athletic Association (ROPSSAA) tournament, back-to-back as a junior and senior. Originally he was trained by traveling wrestler Don Kolov in Woodbridge, Ontario.

Carelli took wrestling classes in the United States and worked as a development territory for the National World Wrestling Entertainment (WWE) for the Ohio Valley Wrestling (OVW). As a planted fan named Santino Marella claiming to be from Calabria, Italy, he made his main-roster debut on the April 16, 2007 edition of WWE Raw in Milan, Italy.

Marella's debut in which, after Bobby Lashley's interference, he took the WWE Intercontinental Championship from Umaga in a No Holds Barred match resulted in both that night and Santino being dubbed "The Milan Miracle" himself. Marella's surname was selected for the character in honor of Famer Gorilla Monsoon's WWE Hall — real name Robert Marella — and given to Carelli shortly before the trip to Italy.

Marella declared his retirement on July 6 at a home show in Toronto, Ontario, after a third neck injury. Marella underwent successful surgery on his neck on September 16, 2014. After retirement also, On July 23, 2018, Dustin Quicksilver (representing his Battle Arts Academy) appeared at an Impact Wrestling TV taping.