Salvatore Sirigu is an Italian professional soccer player who plays as a goalkeeper for Seria A club Genoa and the Italian national team. He is considered one of the best Italian goalkeepers of this generation. The Italian international kicked off his soccer journey playing from Venezia at 15.

A former Italian youth international, Sirigu made his senior debut in 2010. He has played for many top clubs like Paris Saint-Germain, Sevilla, Osasuna, and many more in his whole football career.

On January 12, 1987, Salvatore was born in a city in Italy called Nuoro. As per astrology, his zodiac sign is Capricon and as of 2022, he is 35 years of age. Sirigu plays wearing jersey number 57. Before playing as a goalkeeper, he used to play as a midfielder in his early days at Venezia.

Who is Sirigu married to?

The Genoa goalie, Sirigu is still yet to get married. However, he seems to be deeply in love with his gorgeous girlfriend Camille. The love birds are seen together publicly in various events. They often share their beautiful pictures with their fans via Instagram. 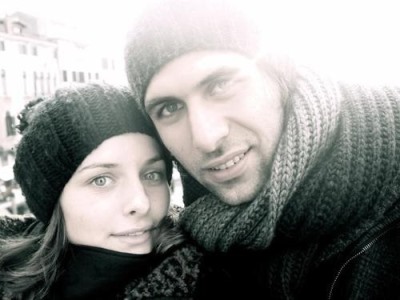 The duo has maintained their professional and personal life equally.

Since childhood, the Nuoro, Italy-born soccer player Sirigu had a keen interest in football. As he grew up, his hunger and passion for football grew even more substantial. He started his football career playing for Venezia and Palermo as a youth player up to 2007 as a midfielder. Because of his health problem(Asthma), the coach insisted home to go in goal.

The former Italian Youth international was at the peak of his career there. Sirigu even broke Bernard Lama's clean-sheet record PSG goalkeeper in Ligue 1. He also won numerous awards, cups, and leagues at PSG. Sirigu was the first choice of the team. After the arrival of German goalie Kevin Trapp, he, later on, left the club and moved to Sevilla on a season-long loan. He made his Sevilla debut on September 17, 2016. Likewise, he then joined  Osasuna and appeared in just 18 games. On June 27, 2017, he decided to join the fellow league club side, Torino, on a free transfer. He was the first choice of the team and to date, he appeared in 141 games in total. Having terminated his contract with Torino by mutual consent, Sirigu joined Genoa on August 3, 2021.

Internationally, he has played chiefly for his youth, i.e. U-18 AND U-19 teams. The Coupe de France champion, Sirigu made his international debut on August 21, 2007. He didn't play as much as a senior because Gianglo Buffalo was the first choice. However, the Nuoro-born goalie is regarded as one of the best Italian Goalkeepers of this generation.

How much Net worth does Sirigu have in 2022?

The 35 years Italian goalie has been on this line for quite a long time. He has played for many tops clubs as well. Thus to date, he must have added huge fortunes to his net worth. As per sources, he has a net worth of $13 Million. However, his salary numbers are still not transparent.

Apart from football, Sirigu also made a handsome income from endorsement deals, brands, and sponsors.