Kevin was born on July 8, 1990, in Merzig, West Germany. He was born Kevin Trapp to German parents. He holds German citizenship and is of German Descent. He follows Christianity. He began playing football at the age of 11.

Who is Kevin Trapp's Girlfriend?

Kevin Trapp is neither married nor single but engaged in a relationship with his caring girlfriend, Izabel Goulart. His girlfriend Izabel Goulart is a stunning Brazilian Victoria's Secret model in the Caribbean. The couple has been dating since 2015 and seems to be happy with each other. 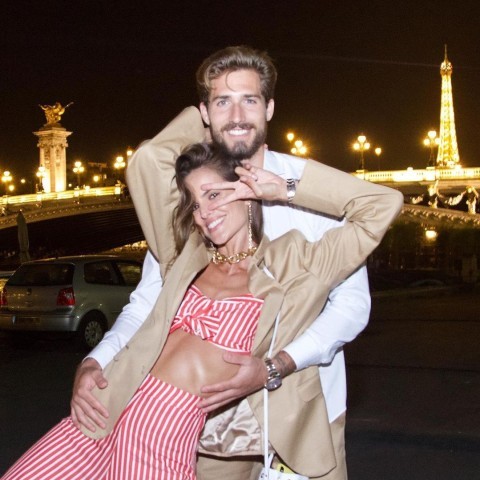 Kevin with his girlfriend on a vacation SOURCE: [email protected]

It's been five years of their relationship, and the couple is often spotted together spending their time together. Goulart is usually found cheering for his partner in stadiums.

Kevin Trapp's Net Worth and Salary

The 32 years old professional has an estimated net worth of $20 million, including all of his assets. Kevin Trapp currently receives an annual salary of £2,548,000 from his present club Eintracht Frankfurt. He has a weekly wage of £49,000.

Besides football, he earns a pretty good amount from his endorsement deals. His market value was recorded to be $13 million in 2017.

Kevin Trapp began his professional footballing career in 2008, joining the professional football club based in German named FC Kaiserslautern's B team. He made his first appearance for the club on August 9, 2008, in a match against FC Carl Zeiss Jena. He was with the B team for three seasons, making 38 appearances. He was later promoted to the club's first team in 2011.

Trapp made his Bundesliga debut on March 12, 2011, in a match against SC Freiburg. His only season with the club ended up with a total of 32 appearances, and he then moved to the league's fellow club Eintracht Frankfurt in 2012. His move to Eintracht Frankfurt was officially completed on June 12, 2012, signing a four-and-a-half-year contract with the club. His team had a great season, with him standing in 3rd place in the table and receiving plaudits for his performances against leaders Bayern Munich despite losing 2–0. His campaign with the club ended prematurely in March 2013 due to a hand injury with the national under-21 team. He was in the club for three seasons with a total of 82 appearances and further left the club in 2015 and switched to France.

Kevin Trapp then moved to the French giants Paris Saint Germain on July 8, 2015, signing a five-year deal with the club. He overtook Salvatore Sirigu as PSG's first-choice goalkeeper in the club during the 2015-16 season. While playing with PSG, his teammates are Neymar, Edinson Cavani, Thiago Silva, etc. In 2019, The player moved to Eintracht Frankfurt and signed until the 2023 season.

He made his official debut for his national side on June 6, 2017, in a 1–1 friendly draw away to Denmark, playing the full 90 minutes.