Gossip Sadio Mane Salary and Net worth 2020; Know about his Sponsorship, Endorsement, Properties, and Business Ventures

Sadio Mane Salary and Net worth 2020; Know about his Sponsorship, Endorsement, Properties, and Business Ventures

Sadio Mane is a Senegalese professional football player who plays a forward for Premier League club Liverpool FC and Senegal National Team. Also regarded as one of the best attackers, Mane recently won the Premier League with Liverpool and was a key player of the team that won the Champions League in 2019. Moreover, he has also won several individuals and team awards both with the club and the national team.

Mane, despite getting lucrative offers from several European giants, has remained with the club and proved his loyalty to the club. He is expected to be a top target in this summer transfer window. After Messi announced that he will leave Barcelona, the Spanish club is trying to pursue Mane as the Argentine's replacement in case he leaves. Here we have made a report of his current salary, net worth, the source of his money, endorsement deals, and business run by him.

Sadio Mane Salary and Net worth 2020

The African player is one of the highest-paid footballers in Liverpool FC and his net worth in 2020 is estimated to be $20 million. His annual salary is reported to be £7.8 million with the weekly wage of £150,000- earning only less than Mohamed Salah, Roberto Firmino, and Virgil van Dijk. Earlier, his weekly wage was £100,000-a-week. which was increased in 2019 after the team won the Champions League.

Sadio Mane's current transfer value in 2020is around €120 million. He joined Liverpool FC in 2016 with a transfer fee of £34 million. His transfer contract while joining Southhampton from Salzburg was £13.65 million.

Sadio Mane has several sponsorship and endorsement deals- the major being the shoe deal with New Balance. Earlier, there were rumors that Mane would change the shoe supplier after Liverpool FC won the case against their multi-million-pound sponsor New Balance. He was expected to sign a deal with Nike. Puma also lined up to sign a ‘eight-figure’ boot deal with Mane.

He also makes money from endorsement deals from Western Union, and Indonesia Tourism.

Mane hasn't invested money in any business ventures. However, there are several clothing items designed under his name through which he makes some additional money. You can buy jerseys, cap, poster, hoodie, phone case, and different other items of him on Amazon.

Sadio Mane's Art Poster Photo is also available while the other popular choice can be a unisex hoodie with SM 10 on the front. 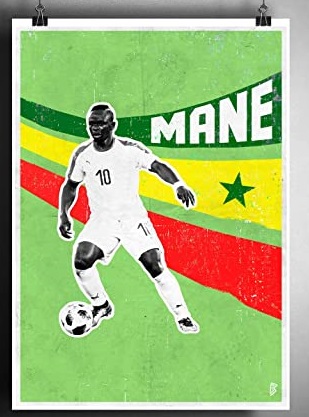 His other properties include a house worth $2 million and several cars like Bentley Continental GT, Mercedes G63 AMG, Audi RS7, and a Range Rover. He is also very active in charity. He spent more than $300,000 for the construction of a school in Senegal and paid for a hospital building in his village.