Ryan Schraeder is an American professional Football Player who plays in the National Football League (NFL) for the Atlanta Falcons as their Offensive tackle. After being undrafted in the 2013 NFL Draft, Ryan signed a three-year contract with Falcons in 2013 and has been playing for the team since then.

Ryan Schraeder reportedly earns around $6,300,000 as his yearly salary from Atlanta Falcons and has an estimated net worth of over $8 Million. In addition, there isn't any information about his relationship status in the media yet.

Further, the NFL player has an average salary of $6,300,000 annually whereas Desmond Trufant is one of the highest earners of the team with an annual salary of $13,750,000.

Some of his contract and salary, including bonus and incentives:

Ryan Schraeder is reportedly unmarried and is not dating anyone currently. Moreover, the details about his past relationships and girlfriend is not revealed yet. He probably is single till date. 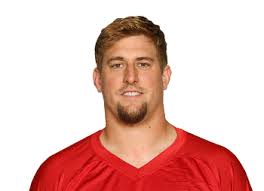 Further, he has not given a single hint about his relationship status as he has kept his personal life low profile.

Ryan Schraeder was born on May 4, 1988, in Wichita, Kansas. Further, the details about his parents and siblings are not available in the media yet. As per his nationality, he is American and belongs to the White ethnic group. Further, his star sign is Taurus.

On April 28, 2013, the Atlanta Falcons signed a three-year $1.48 million contract with Schraeder that includes a $2,000 signing bonus. Schraeder signed a five-year contract extension with the Falcons on November 21, 2016.

Currently, he is playing along with his star team-mates such as Takkarist McKinley, Julio Jones and many more.