Ross Barkley is a professional English football player who plays as an attacking midfielder for Premier League club Chelsea and the England national team. A product of Everton Youth Academy, he played for the club wearing the no.8 jersey, eight years long.

The English player has an estimated net worth over $7 million. What's more, Barkley dating his girlfriend Zoe Riozzi.

Ross Barkley Net Worth and Endorsements

While playing for Everton, he had an annual salary of $5.2 million including bonus. The English skipper made about $75 thousand and more from the bonus in a week.

His current market value is €25 million,  as of December 2018. He is endorsed by Nike and wears the boot designed by the company.

Ross Barkley is not married yet but is not a single man. He is in a relationship with his girlfriend Zoe Riozzi. Zoe is his childhood friend and they started dating about five years before. 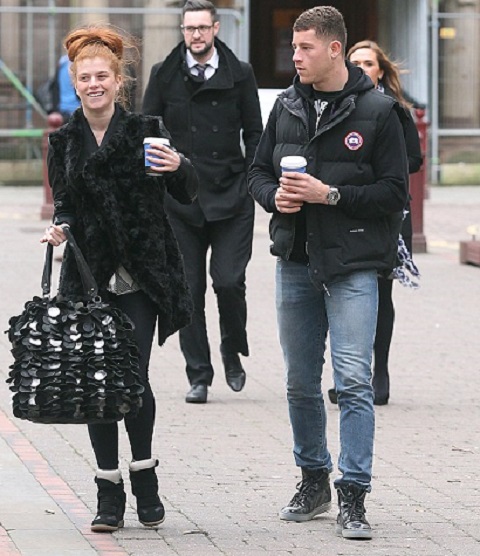 23 years old Zoe is a Nursery school worker. Ross and Zoe grew up on the same side of the town and currently live near Wavertree in Liverpool. They were on a vacation to Buckingham Palace and Dubai some years back.

He has a height of 1.6 m, and his Zodiac Sign is Capricorn.

Ross Barkley was born on 5 December 1993, in Liverpool, England. He is of British nationality. He was born to Peter Effanga and Diane Barkley. His father is from Nigeria whereas his mother is German.

Barkley used his mother's last name due to his bad relationship with his father.

He joined Everton at the age of 11 and was included in the club's youth teams in 2005. He made his first appearance for the club in Everton's first home match of the season against QPR in 2010 season and was named the man of the match. He further signed a new four-and-a-half-year contract in December 2011 to play for the same club.

Barkley was moved to Sheffield Wednesday on a one-month loan deal, on 14 September 2012 and played for the club in an away defeat against Brighton & Hove Albion. He played 13 games for the club scoring 4 goals. Barkley again went out on loan to Leeds United for an initial one-month stint, in January 2013 and had his debut for Leeds in a derby match against Barnsley. He played 4 games for the club without a goal.

After the completion of his loan, he was back to his club, Everton for the 2013-2014 season. The first goal for the club came on an opening day in a 2–2 draw against Norwich City and was later named the man of the match. He was named as one of the six players on the shortlist for the PFA Young Player of the Year award on 18 April 2014.

Barkley was eligible to represent both England and Nigeria as his grandfather was a Nigerian, but he chose to play from his birth land, he has represented England in both junior and senior team.

He made his professional debut with the senior side in 2013 replacing Jack Wilshere in a World Cup qualifier against Moldova at Wembley in which his team out marked Moldova by 4-0. He has won over 58 caps for his national side scoring eight goals.

He made his professional debut with the senior side in 2013 replacing Jack Wilshere in a World Cup qualifier against Moldova at Wembley in which his team out marked Moldova by 4-0. He has won over 58 caps for his national side scoring eight goals.