Rodney Clemons is an American football player. He played mostly the college football for Southern Methodist University in Texas. Rodney played as a Safety for his team. Clemons made the Dave Campbell's All-Texas College Second-Team selection in his junior year.

Rodney Clemons was born on December 28, 1996, in Katy, Texas. He was born under the Capricorn birth sign. He is the son of Rodney Clemons Sr and Tammy Clemons. Much about his parents and early life is under the radar. Rodney graduated from James E. Taylor High School and enrolled at Southern Methodist University. Clemons stands six feet in height and weighs 90 kg when talking about his physical appearance.

Rodney is pretty private about his economic career and salary. The player did not get drafted into the NFL for the first time and never looked back in American football. He has successfully kept his life away from the spotlight. Nothing much about his career and salary is known to the media. His fellow draftee partner Oshane Ximines has a net worth of $3 Million. 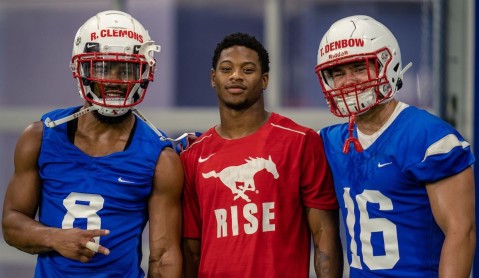 Rodney along with his teammate's
SOURCE: Dallas News

A football player makes a handsome amount from their sponsorship and advertising deals. Clemons must be living a happy life from his career earnings. The salary of an NFL draftee is more than $10 Million in the 2022 season.

Who is Rodney Clemons Dating? Know About His Girlfriend and Relationship Status

Clemons does not show any presence on social media. The former college football player is out of reach of the media. He has not shared a word about his relationship status. The player could be single, dating or even married and living a happy married life.

Rodney started playing football in middle school. The multi-talented athlete represented his High School in numerous sports, from basketball and track and field to football. He even led the team to several titles while playing as a captain. After graduating from High School, Clemons received numerous offers from the universities and remained with the South Methodist University.

Clemons played in four preseason games for the University team, suffered an injury, and received a medical redshirt. In his first year, The player started in all twelve games and finished fourth on the team in tackles with 56, including two tackles for loss. In his sophomore year, He played in thirteen games and Registered 68 tackles, 55 solos, 13 assists and 4.0 tackles for loss and one sack. Rodney started in twelve games for the junior year, and at the end of the season, He won earned Dave Campbell's All-Texas College Second-Team selection.

Rodney played in thirteen games in his senior year and had a good season. The player finished his university career as the all-time leader in total games (54). He earned the Athlon Sports Preseason AAC: second-team defense. After a good season, Rodney listed his name for the 2019 NFL draft but was undrafted and has been out of reach of the media.