Rodger P. Saffold III well recognized as Rodger Saffold is an American football player who is signed to the Tennessee Titans of the National Football League (NFL) as their No. 76 guard. At the 2010 NFL Draft, he was picked by the St. Louis Rams in the second round, 33rd overall, where he played until 2018.

Born on June 6, 1988, Saffold did his high schooling at Bedford High School, where he played defensive end and offensive tackle. Following graduation, he enrolled at Indiana University, playing for the Indiana Hoosiers football team. He holds an American nationality and belongs to the Afro-American ethnic background.

How Much Is Rodger Saffold Net Worth In 2020? Know His Contract Detail, Salary, & NFL Career Earnings

On 11th March 2014, he inked a lucrative five-year, $42.5 million contract with the Oakland Raiders, however, after a disagreement in Oakland on Saffold's physical condition, he returned to the Rams and agreed on a five-year, $31.7 million contract.

Besides NFL, he also gets paid by sponsorship, ads, endorsement, bonus featuring and so on. He is the owner of the competitive Call of Duty team Rise Nation, which he purchased in April 2014.

As of 2020, the NFL veteran, Rodger Saffold has an estimated net worth of $30 million. No doubt, he is living a lavish lifestyle with his family.

In 2019, the NFL star scored a newly built house in Encino worth $3.88 million. The Traditional-style-two-story sits behind fences and gates on about a third of an acre. 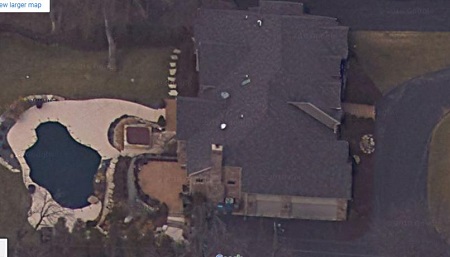 Further, it features a sports court, a putting green, and a swimming pool, spa, cabana, and a fireplace that sits across from the pool.

Rodger Saffold is married to his childhood sweetheart, Asia Saffold. In fact, the two grew up on the same street in Ohio. However, they lost touch after high school, but Facebook reunited them after Saffold messaged her. Following a happy long-lived romantic relationship, Rodger and Asia finally tied the knot in 2014. 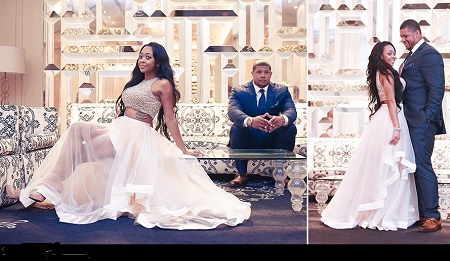 On November 24, 2012, the couple welcomed their first child, a daughter, Aaliyah Nicole. Their second, a son, Rodger Price Saffold IV, was born on January 15, 2015. 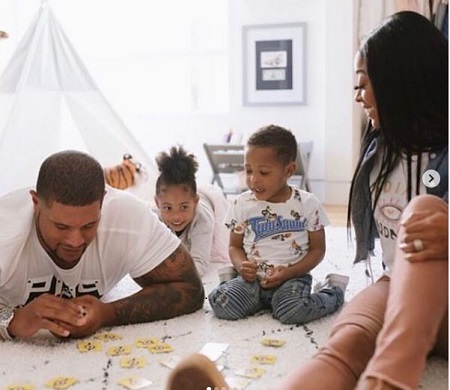 What's more, the parent of two children starred in reality television, Hollywood & Football, the short-lived E! The series premiered in 2016 and lasted one season. Rodger and his spouse are the only two left from the show still wearing Rams jerseys.

"Happy Anniversary to my beautiful wife @asiasaffold I know I don't deserve you but that makes the journey well worth it!" Rodger posted on Instagram on 18th July 2018, in their 4th marriage anniversary.

Having said that, let's know a little more about Rodger's wife. Asia was born on 12th October 1979, in Cleveland, Ohio. A graduate of the University of North Carolina, she was the event operations intern at the Saint Louis Sports Commission in 2012. In 2014, she went to serve as an inside sales representative for Red Ventures and subsequently realtor for Keller Williams Realty, Inc. Before moving with the Kathy Helbig Group.

Gifted His Mom A Jaguar

In April 2016, Saffold purchased his mom a brand new Jaguar. He made a promise to buy his mom a new car many years ago in his hometown of Bedford, Ohio. In fact, he was just nine years old at the time. 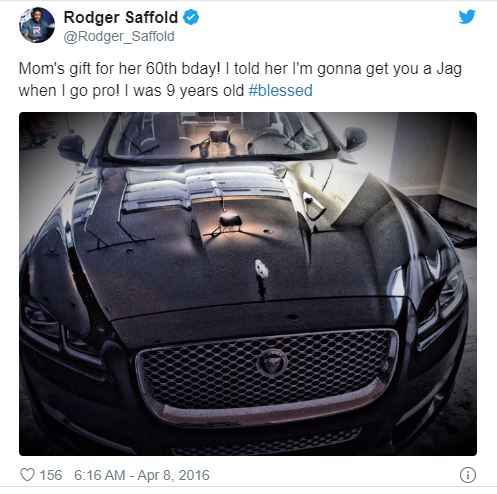 Of course, Saffold isn't the first player to reward a parent with a new car. Usually, athletes are seen giving a gift to their parents after their rookie season.

Grew Up A Cleveland Browns Fan

Rodger Saffold was born to parents: Rodger Saffold II and Angela Coopridge. Growing up in Bedford, Ohio, an eastern suburb of Cleveland, his grandfather took him to Browns games regularly. Matter of fact, Rodger's Browns roots go much deeper.

Two of the Browns' veteran Jim Brown and John Wooten, are longtime friends of the Saffold family, who eventually, pushed Rodger's father to football. Saffold II made it all the way to college football at the University of Iowa.