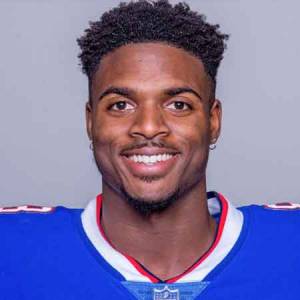 Robert Foster is an American football wide receiver for the Buffalo Bills of the National Football League. He was undrafted in the 2018 NFL Draft but was signed by the Bills as an undrafted agent.

Foster is currently playing the very first season of his professional career in NFL.

Robert Foster Jr. was born on May 7, 1994, in Monaca, Pennsylvania. He attended the Central Valley High School in Monaca, Pennsylvania where he played both football and basketball team. He played as the wide reciever for his high school team and was ranked the nation's No. 2 receiver ranked 23rd overall in the 2013 class.

After completing his high school, Robert Foster joined the University of Alabama. He joined the football team of his university and continued playing in college football. He redshirted his sophomore season in 2015 due to a season-ending shoulder injury after playing in the first three games. He saw limited time at the field in 2016. At the end of his college career, his career stats were  35 pass reception for 389 yards and three scores during his career at Alabama.

Robert Foster did not have a highlighting college career, but despite his limited college statistics, Foster was invited to the 2018 NFL Scouting Combine. During his time at the scouting ground, he clocked 4.41-second 40-yard dash, fifth overall among receivers. The record showed him to be very athletic and proved his value despite him not having a huge college statistics.

Foster was not drafted in the 2018 NBA Draft but was drafted by the Buffalo Bills as an undrafted free agent on May 11, 2018. He made his professional debut with the team and in week 2, he recorded his first two professional receptions. He was waived by the team on October 18, 2018, and was resigned to practice squad.

After a short while in the practice squad, Robert Foster was once again promoted to the active roster of the Buffalo Bills on November 10, 2018. He is currently in the rookie season run at present and we have yet to see how he shall improve in the seasons to come.

Robert Foster has not been the highlight of the media as a professional NFL rookie, but there is no doubt that he still holds the attention of the media.

Despite having all the details of his career life whether it be his college or professional, there is no information about his love life and relationship. His relationship status at present remains a mystery and it is not known whether he has a girlfriend or none.

Net Worth of Robert Foster

Robert Foster is a rookie at NFL and is in his rookie trade. He is currently signed to Buffalo Bills but details of his signing contract with the team have not been disclosed. He reportedly has a salary cap hit of $484,000 for the year 2018.

His net worth at present remains unknown due to lack of information in his personal assets and financial revenue.