RJ Barrett is a Canadian college level basketball player. As of 2019, RJ Barrett currently plays for the Duke Blue Devils of the Atlantic Coast Conference as their forward.

As a forward, RJ Barret reportedly earns a few thousand dollars as his yearly salary from the University. Further, Steve Smith has an estimated net worth of over $50,000.

As of 2019, Barrett's net worth is estimated over $50,000. He is currently playing for Duke Blue Devils men's basketball team of the Atlantic Coast Conference.

The exact figure of his annual income has not been disclosed but the estimated amount of his salary is no less than the five-digit figure. Further, the university has provided him with an athletic scholarship which covers his fees, accommodation, and food till he graduates.

Rowan Alexander Barrett Jr. must have developed his interest in sports as he was raised in a family of athletes. His father, Rowan Barrett was also a basketball player who played for St. John's University. Rowan Sr. was a representative of Canada at the 2000 Olympic Games and the 1998 and 2002 FIBA World Championships. 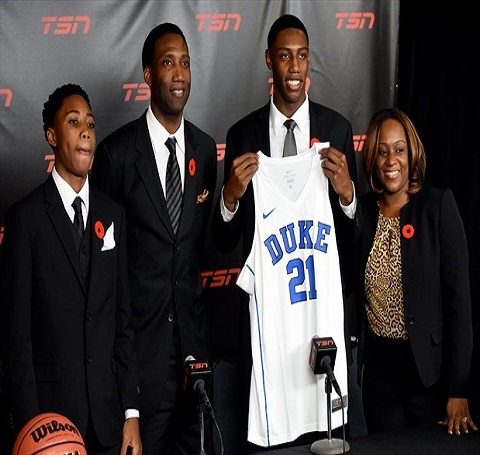 There is no information regarding his romantic involvement and it looks like he is not into any kind of relationship till date.

Facts and stats of RJ Barrett

Other than being a famous amateur basketball player RJ Barrett has also gained much fame in social media and has over 48.9K followers on his official Twitter account.

Rowan Alexander Barrett Jr. was born on June 14, 2000, in Toronto, Ontario to father Rowan Barrett and mother Kesha Barrett. As per his nationality, he is Canadian and belongs to the African-Canadian ethnic group. Further, his star sign is Gemini.

Later Barrett transferred to Montverde Academy in Montverde, Florida and decided to pursue his career in basketball. After tallying 22 points and 8 assists in the Jordan Brand Classic international game, Barrett was able to earn the Most Valuable Player Honours.

Barrett had an announcement on November 10, 2017, that he would be joining Duke University for the 2018-2019 season. Same University where the players like Austin Rivers, Frank Jackson graduated. On August 15, 2018, he made his preseason debut for Duke and won over Canadian college Ryerson, Scoring 34 points with 5 rebounds.

RJ Barrett has also played many international leagues such as the 2015 FIBA Americas U16 Championship, 2016 FIBA U17 world, as well as FIBA Under-19 Basketball World Cup and also earned gold, silver medals. Achieving different honors he was named as The Most Valuable Player. Barrett along with Zion Williamson is considered as the future rising stars on the NBA.