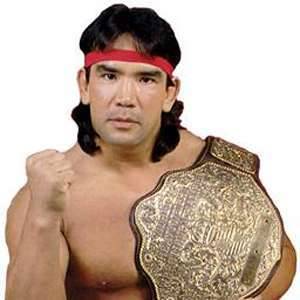 Ricky Steamboat’s full name is Richard Henry Blood Sr. and he is a well known by his ring name Ricky “The Dragon” Steamboat. He is a retired wrestler from the United States. He earned the stardom by wrestling in the American Wrestling Association (AWA), the National Wrestling Alliance (NWA), World Championships Wrestling (WCW) and the World Wrestling Federation. He was born on February 28, 1953 in West Point, New York, United States. Currently, he resides in the Mooresville, North Carolina, United States. He is an American by his nationality. He is a multiracial by his ethnicity. His birth sign is Pisces. He was born to an English father and a Japanese mother. His brother Vic Steamboat is also a former wrestler of United States.

He attended Boca Ciega High School in Gulfport, Florida. He also wrestled during his high school years. Twice he also became the New York Wrestling State Qualifier and Wrestling Champion. He started his professional wrestling in 1976 debuting in the American Wrestling Association (AWA) under the real name Rick Blood. From 1976 to 1977, he participated and performed in Championship Wrestling from Florida. Later for 8 years, he entered into the National Wrestling Alliance. In 1985, he agreed to a contract with the World Wrestling Federation (WWF) and it provided him a huge stardom to his career. Later after that, he also participated and performed in the World Championship Wrestling, North American Wrestling Association, and New Japan Pro Wrestling. He is popular for his finishing moves Diving Crossbody. Some of his signature moves are Arm drag, Dropkick, and Front powerslam. Numerous rewards and awards have honored him.

His personal life is not as perfect as his career. There are lots of difficulties and ups and downs in the private life of Ricky Steamboat. His first wife is Maureen Muriel Powers whom he married in 1977. However, their relationship came to end in 1980. They divorced just after 3 years of their marriage. His second wife is Debra whom he married in 1981. They separated after having a four-year of the marriage relationship with each other. His third spouse is Bonny Hastings. He wedded Bonny Hastings in 1985. They also had spent some wonderful moments together after their marriage. However, their wedding had not sustained long as Ricky Steamboat expected. They separated in 2004. Just after one year of his third separation, he wedded to Claudia Sobieski. Currently, they both are extremely happy in their relationship. There are no any rumors flying about their divorce. He has a child name Richie Steamboat.

Ricky Steamboat has a considerable amount of net worth. His net worth is around $4 million. His fans and follower love to follow him on social networking sites. He is popular on Twitter. Moreover, detail info about his life and bio can be easily taken from Wiki.