Richard Alan Rodriguez who is famously known as Rich Rod is an American football coach and former player who is currently having a coaching career in Ole Miss. He has been the Coach for many clubs and universities throughout his career. He has been part of Salem University (1988), Glenville State College (1990–1996), West Virginia University (2001–2007), the University of Michigan (2008–2010), and the University of Arizona (2012–2017).

Born on May 24, 1963, in Grant Town, West Virginia, he is the son of Vince Rodriguez and Arlene Rodriguez. His father worked for 27 years in the mines. Rich was an all-state football and basketball player at North Marion High School and attended his college at West Virginia University.

Rich Rodriguez is the reputed coach of American Sports and he has an estimated net worth at around $3 million. He currently serves as an offensive coordinator at Ole Miss and might reportedly earn about $1 million in 2019.

In 2006 when he became coach of West Virginia Mountaineers football team where he earned $1.1 million and in 2007, his annual salary was $1.83 million.

He started to Coach in Michigan Wolverines football in 2008 where he was paid $2.5 million annually. His annual earnings in 2010 were $2.52 million.

In 2012, he initiated his coaching career in Arizona Wildcats football Club where he gained $1.5 million in his first year and in 2014 he pocketed $3.29 million.

Tied in Knot With Rita Setliff

Rodriguez married Rita Setliff in 1989 and the couple has two children, Raquel and Rhett. She used to be popular in the university for her "Miss Rita's World Famous Nacho Cheese Dip.

Mrs.  Rodriguez is the daughter of Horace Setliff an Army veteran. She used to play tennis for the Fairmont State where she met her husband. They saw each other in the college cafeteria where football players gathered and from that moment they started dating. 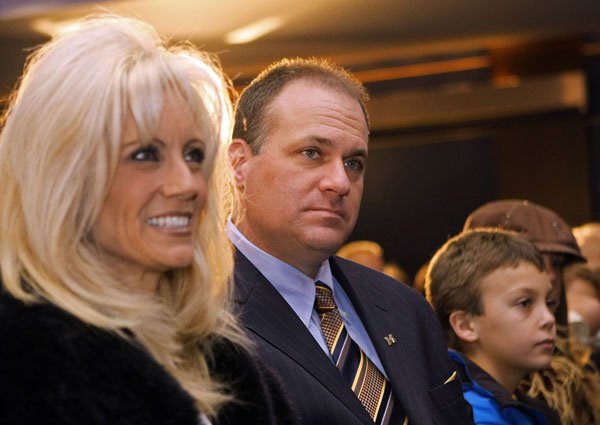 His wife Rita used to work in a telephone company and left after working for 10 years. A year later she became a mother of their firstborn Raquel and two years after that, their son Rhett was born. 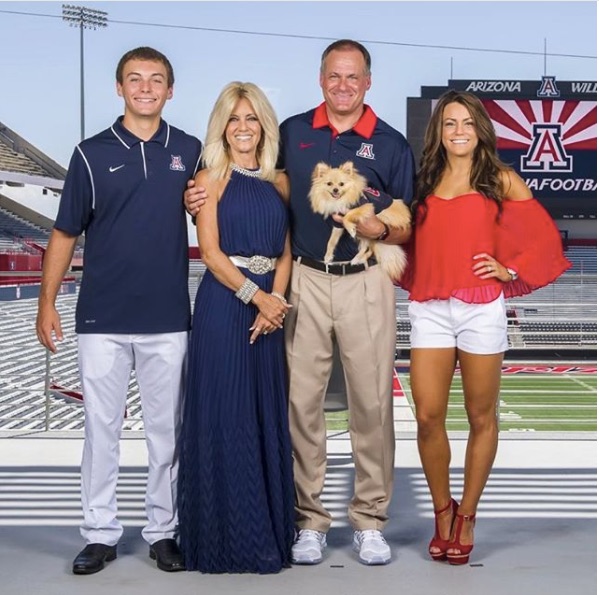 Rodriguez with his wife and children SOURCE: fabwags

Raquel followed her mom's path and she is the cheer captain at Arizona, while Rhett, chose to follow his dad’s profession and is a quarterback for the Wildcats at the University of Arizona.

Rodriguez's wife makes one of the most coveted awards on campus by giving it to deserving players as a weekly reward.

Rich was accused of sexual harassment by Arizona's former administrative assistant Melissa Wilhelmsen in December 2018. She filed a $7.5 million notice of claim with the Arizona Attorney General’s Office claiming the former Arizona coach sexually abused her and created a  hostile workplace.

She also revealed that he had tasked her to hide his extramarital affair from his wife and family.

On November 6, 2015, Rodriguez asked Melissa to get a sideline pass for his “friend” for the USC game in Tucson, which turned out to be his girlfriend. During the game, Melissa realized that Rodriguez’s wife was also on the sideline. At some point, Melissa had to stand between the two hoping to avoid a confrontation. The following Monday, Melissa complained to Rodriguez about how upsetting it was to be placed in that situation. Rodriguez laughed it off without acknowledging her stress or sense of betrayal to his wife.

After the allegations became public, Arizona released Rich from his post. The former head coach admitted having extramarital affair, however, he denied the sexual allegations.

Rich Rodriguez is the four-timesWest Virginia Intercollegiate Athletic Conference (WVIAC) champion from 1993–1996 and from 2003 to 2007 he was honorable mention in Big East Conference. In 2014 he won the Pac-12 South Division with Arizona.