Rhian Joel Brewster a.k.a. Rhian Brewster is an English footballer who is currently signed to Liverpool and the England U21 national team. The striker was a team member of the England national team that won the 2017 FIFA U-17 World Cup in India and was awarded the Golden Boot for ending as the competitions leading goalscorer.

How Much Is Rhian Brewster Net Worth? Know His Contract, Salary, & Market Value 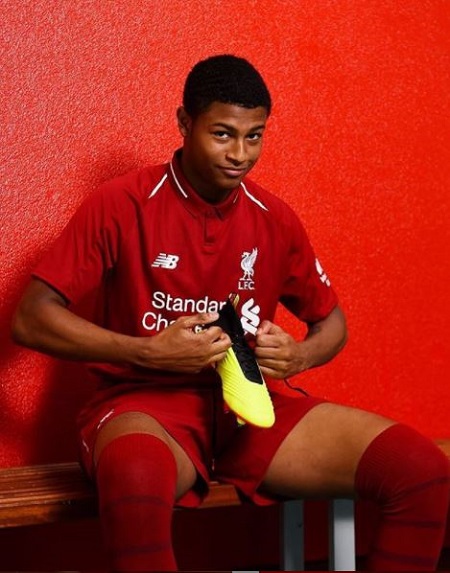 Additionally, he earns extra bucks playing for the England U-21 national team, where he has been capped six times. Not to mention, his endorsement deal with Adidas. As of 2020, his net worth is approximately $1 million.

Noting is known about Brewster's love life. The Liverpool striker is yet to go open about his girlfriend or relationship with his fans. What he says are no comments. Possibly, he is much focused on his football career rather than being in a romantic relationship. For now, he is single.

Brewster was born to a Barbadian father and Turkish Cypriot mother. He has two younger sisters: Hulya and Jaylene.  Further, Brewster enrolled in school at Chadwell Heath Primary School prior to joining the Chadwell Heath and Shield Academy YFC.

At the age of eight, Brewster joined the Chelsea academy where he remained until 2014, whereafter he left to join Liverpool.

In October and November 2016, he was called up for the first-tea, for club friendlies during which he scored a hat-trick against Accrington Stanley. In June 2018, he inked a five-year professional contract with Liverpool. On 7th May 2019, he was named in the match squad for the second leg of Liverpool's 2018-19 Champions League semi-final against Barcelona, however, he remained an unused substitute.

Though he never appeared in the Liverpool's game in the 2019 UEFA Champions League Final against Tottenham Hotspur, he collected a winner's medal as Liverpool won 2-0.  Finally, on 25th September 2019, he made his competitive debut for the club in an EFL Cup match against Milton Keynes Dons.

On 7th January 2020, he went to Championship side Swansea City on loan for the remainder of the season.