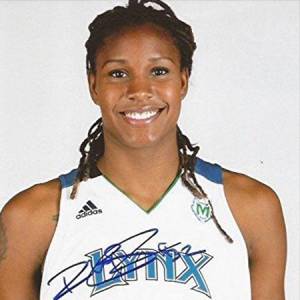 Rebekkah Brunson is an American basketball player who plays in the Women's National Basketball Association (WNBA) for Minnesota Lynx as their power forward. She was drafted by the Sacramento Monarchs in the 2004 WNBA draft and also played for different teams like Taranto Cras Basket, Dynamo Kursk

Rebekkah Brunson has an estimated net worth of around $3 million as of 2019 and is currently receiving a salary of around $110,900 annually.

How much is Rebekkah Brunson's Net Worth and Salary?

Rebekkah Brunson has a total estimated net worth of above $3 million as of 2019 which she earned from her professional WNBA career, In addition to this, she is currently receiving a sum of money around $110,900 as her annual salary from the Minnesota Lynx team in 2019 whereas her weekly salary is reported to be around $2,133.

Brunson has made a decent amount of money so far from her professional WNBA career and is still continuing her basketball career which suggests that she will add some more money to her income in the future.

Besides her financial earnings, she also owns a Belgian waffle food truck which she operates along with her partner and this idea came after her trip to Belgium when she was playing there. She also has a nice collection of cars and has her own home.

Besides she has opened a foundation named 32 foundations which provides sponsorships to youths in sports and academic opportunities in the metropolitan DC area.

Who is Rebekkah Brunson Married to? Know Her Spouse

Rebekkah Brunson is married to her partner  Bobbi Jo Lamar Brunson after being in an affair for a very long time. Rebekkah and her spouse are blessed with a lovely son named Graham Matteo Lamar Brunson born on September 29, 2018.

Her partner Bobbi made a series of posts about her pregnancy earlier and also posted the photo of the child some days after the birth on her Instagram.

Rebekkah is currently living a happy married life with her wife Bobbi since they haven't reported any disputes between their marital relationship so far.

Brunson seems to be pretty much focused on her career and despite all these, she manages time for his family and kid.  Besides, she is also involved in many charities and social works. Brunson openly speaks about her sexuality since she doesn't seem to care much.

Rebekkah is often called as Bekky and her favorite TV show is called Court TV.

Rebekkah Brunson was born to mother Lucy Brunson on December 11, 1981, in Washington, D.C., United States. Brunson is American by nationality and belongs to the mixed ethnic group. She spent her childhood along with her twin brother.

Later on, she began her career with the  Minnesota Lynx in 2009. During her 2011 season, was also named as the WNBA Player of the Month after scoring six consecutive double-doubles in June. After the injury of Candace Parker, she was placed in her position.

After some time in 2013, the injury of Brittney Griner helped her to made All-Star Game. Since 2009, Brunson is playing for the Minnesota Lynx. Besides her WNBA career, she also played in several international tournaments including USK Prague.