Rasir Bolton is a college basketball player who plays for the Iowa State Cyclones men's basketball team in the Big 12 Conference of NCAA Division I. Earlier, he enrolled and played for Pennsylvania State University but later transferred to Iowa after Penn' coach Pat Chambers made "noose" remark on him.

Petersburg, Virginia native, Rasir Bolton was born on 27th September 1999, under the star sign Libra. The college is an American by nationality who came from an Afro-American ethnic background.

How Much Is Rasir Bolton's Net Worth?

A matter of fact, college athletes do not get paid, hence, Rasir Bolton's net worth and salary as of 2020 are under review. If he goes pro and selects in the NBA in the future, he will have his salary in millions. The average NBA player's salary is $7.7 million per annum.

Patrick Chambers Apologies For His Remark

Rasir Bolton who played for Penn State to Iowa after coach Pat Chambers made a noose remark in 2019. Bolton averaged 11.6 points in 26.9 minutes per game, before transferring to Iowa State in the spring of 2019. 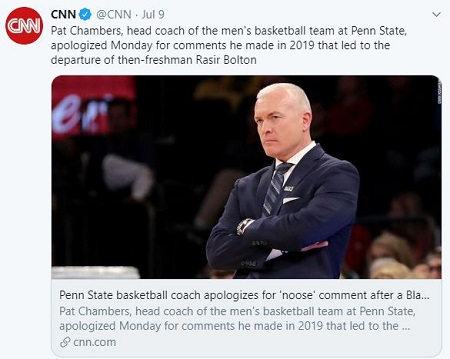 later, Pat Chambers released his own written statement which reads,“I’ve realized the pain my words and ignorance caused Rasir Bolton and his family and I apologize to Rasir and the Bolton family for what I said,” Chambers wrote. “I failed to comprehend the experiences of others, and the reference I made was hurtful, insensitive and unacceptable."

Is The College Athlete Dating?

There is less to no information about Rasir Bolton love life, not even his relationship status. The college basketball player seems less active on socials such as Instagram and Facebook but little surfs Twitter. Scrolling through his twitter page, it seems he is yet to get into the relationship and have a girlfriend. For now, he is believed to be single and focused on his sturdy and on his career.

Rasir was born as one of three children to Ray and Chalonda. His father played basketball at Betune-Cookman and coached Rasir in high school as well as AAU. he has a brother, Resean, and a sister, Chamir.

A graduate of Massanutten Military Academy, Rasir led the Colonels' post-graduate men's team to the nation's No. 1 prep school ranking, a school-record 32 wins, an undefeated record at home and to the National Prep Tournament Elite 8 as a senior. Further, he averaged 20 points per game with 5.0 assists and 4.0 rebounds per contest.

Currently, the 20 years old is planning on majoring in hospitality management.