Raul Albiol is a professional football player from Spain who currently plays in the Spanish top league, Laliga. He plays in the central defender position for Villareal and has been playing for them since 2019. He was in their squad that won the UEFA Europa League in the 2020-21 season.

He previously played for Napoli where he won the Coppa Italia in the 2013-14 season and Supercopa Italiana in2014. Also with Real Madrid, he became the Laliga champions in the 2011-12 season. In 2010-12 he won the Copa del Rey while winning the Supercopa de Espana in 2012. Individually, he was named the La Liga Breakthrough Player of the Year in 2006.

Raul's Bio and Personal Information || His family of footballers

Raul Albiol Tortajada, famously known by the name Raul Albiol was born on September 4, 1985, in Villamarxant, Spain. According to astrologers, his birth sign is Virgo. His father's name is Miguel Albiol Balaguer and his mother's name is Manolita Tortajada. As per sources, his dad Miguel was also a professional footballer. He played in the Segunda Division, commercially famous as La Liga 2. He used to play for Sabadell.

He has not shared additional information about his parents. He barely mentions his mom on his social media too.

Raul is not the only child of his parents. He grew up along with his 3 siblings, both brothers in his hometown. He is the middle child between his brothers, Miguel and Brian.

Miguel Albiol is also a former professional footballer who used to play in Laliga like his younger one. He played for Valencia and Rayo Vallecano during his career before retiring in 2015. The age gap between Raul and his older sibling, Miguel is 4 years.

He also has a younger brother named Brian who is also a professional footballer. He has not been successful like his elder brothers but is currently playing. As per sources, his parents named him after the former Danish footballer Brian Laudrup.

Born and raised in Vilamarxant, he started his career with Ribarroja which is a local football club in Valencia. At that time he was just 9  years old. After playing for 2 years, he moved to his hometown club Vilamarxant. There he played for a year and later moved to Valencia in 1997.

He played for the Youth team of Valencia between 1997 and 2003. Finally, in 2003, he got promoted to their B team and after playing for a year he was in their main squad. During his time at Valencia, he was named the Laliga Breakthrough Player o the Year in 2006.

He joined Real Madrid in 2009 and spend 4 years and later moved to Napoli. It was in 2019, he joined Villareal.

Height and Weight of Raul

His weight is around 82 kg and has short black hair. Also, he appears with a beard that has turned white in some parts.

The net worth of Albion

The Spanish defender Raul Albion has been playing for top teams in different countries for more than 12 years. He has been involved with teams like Real Madrid, Napoli, Villareal, and Valencia. 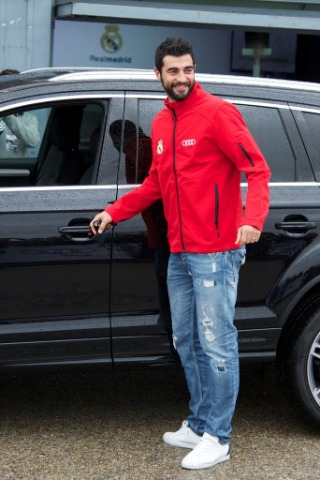 As per sources, the net worth of Raul is estimated to be $10 million approximately. Most of his income comes from playing for Real Madrid, Sevilla, and Tottenham Spurs.

His net worth includes his cars, houses, monetary values, luxury items, and assets. And he lives a luxurious lifestyle with his family in Spain.

Raul's Contract and Salary with Villareal

Albiol Raul signed his professional contract with his current club, Villareal on July 4, 2019. And his contract will end on June 30, 2023. Villareal signed the player from Napoli for a fee of 4 million pounds.

Read: Salary, net worth, and market value of Felix Komolong

According to the transfermarkt, the market value of Raul is 2.5 million pounds in February of 2022.

His market value has decreased rapidly in recent times. It was 18 million pounds during his time at Real Madrid in April of 2010. While it was 5 million pounds in 2019 when he joined Villareal.

Is Raul married or still dating?

Villareal's defender Raul is currently living a happily married life with his wife Alicia Roig. The couple has been married for more than 10 years as of 2022. Though the actual date and location when Raul met his wife Alicia are not known to the public as they have never opened about their first date. But after dating for a few years, the pair decided to walk down their aisle in June of 2011.

The Albiol couple had their wedding ceremony held in Valencia in the presence of their close friends and family. As per sources, his teammates from Real Madrid, Alvaro Arbeloa, and Xabi Alonso were also present in their marriage ceremony.

Since then, they have been together and never had a serious dispute that can cause their separation. But it has grown more since then. It can clearly be seen in social media posts of Raul dedicated to his wife.

He does not hesitate to wish his love on different occasions and express his love towards his partner. One of his posts is,

We can clearly see his love growing more towards his love.

And his wife also never forgets to pay back his love. As per the defender, his wife is the greatest supporter in his career. In 2021, Alicia posted a long Insta post supporting her husband saying,

"You are a great athlete but a better person. Wherever you go you are loved, you have that gift and I am excited to see all the support you are receiving."

Who is Raul's wife Alicia?

Alicia Roig is a medic and a simple family woman who is famous for being the wife of the Spanish defender Raul Albiol. She has been with her partner for more than 12 years. She met him in Spain while he was at Real Madrid.

Raul's wife Alicia was born on July 27, 1986, in  Valencia, Spain and her birth sign is Leo. She was born to her Spanish parents whose detailed information is not known to the public. As her lover, she is also Spanish by nationality. If we explore Albion's Instagram, we can see that he wishes his partner on her every birthday. In 2021, he wished saying,

"Happy Birthday to the most wonderful and beautiful woman in this world!! I LOVE YOU madly @alicia_roig23"

She is also active on Instagram where she has more than 17,000 followers. Her Insta Id is @alicia_roig23. She regularly gives updates about her private life, as well as her family.

Read: Who Is Mikel Merino Dating? Know About His Relationship Status and Girlfriend

Raul and A Roig: Parents of 4 children

The World Cup-winning Villareal's defender Raul Albiol and his partner Alicia Roig are blessed with 4 children, 3 daughters, and a boy.

They have not revealed their son's and daughters' names and other information as of now. But they frequently share thei photos on different occasions. 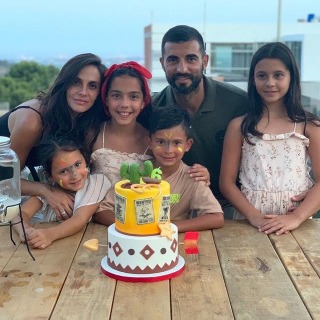 Raul Albiol with his wife and children SOURCE: [email protected]

Raul's youngest daughter's name is Mia who was born on December 29, 2018. While their son celebrates his birthday every year on the 19th of July. In 2021, mother Alicia posted wished her child saying,

"You are so special that you deserve all the good things in this world and a little more. Happy birthday to my favorite Neapolitan. we love you"

Raul is also active on Instagram where he posts about his games, training, and time with family.