Alfonza Hamilton, well recognized as Pep Hamilton, is an American football coach who currently served as the quarterback coach for the Los Angeles Chargers of the National Football League (NFL). Earlier, he held the position of head coach and general manager at the DC Defenders of the NFL.

Charlotte, North Carolina native Pep Hamilton was born on September 19, 1974, under the star sign Virgo. The forty-five-year-old holds an American nationality and is of Afro-American ethnic background.

As of 2022, Pep Hamilton has an estimated net worth of $5 million. The significant source of his income is his coaching career.

Records show that Hamilton originally signed a four-year $4.25 million deal with Michigan Wolverines with an annual salary of $1 million for the first three years and $1.25 million for the fourth year. He summoned a $150,000 signing bonus in early 2017 and received a $450,000 retention bonus in 2018. 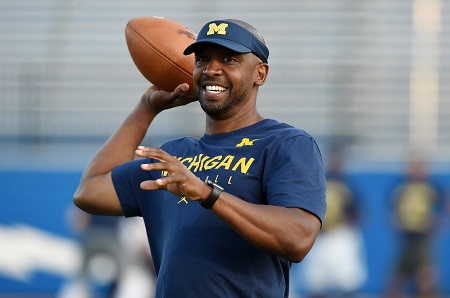 He was scheduled to make $1 million with another $250,000 in retention money through the 2019 season before making $1.25 million in 2020. On 4th February 2019, he resigned from Wolverine. As reported, the agreement stipulates Hamilton will not be eligible for employee benefits through that date. He also will not receive the $250,000 retention bonus he had in his deal for 2019.

It's unclear what Hamilton's financial settlement agreement with the Los Angeles Chargers is at this time.

Pep Hamilton has always lived a low-key personal life. The information regarding his relationship, married, affair or girlfriend is under wrap. Additionally, he is nowhere to be found on Instagram but surfs Twitter, where he only tweets his professional post.

However, in a released statement, Michigan coach Jim Harbaugh said, "Pep Hamilton is a proven, outstanding football coach, husband, and father." From the statement, it is clear that Hamilton is married.

Pep Hamilton was born to Al Hamilton. Besides, there is no information about his other family members.

Hamilton enrolled at West Charlotte High School. Upon graduation, he attended Howard University, where he played quarterback from 1993 to 1996, earning the team's scholar-athlete award in 1995 and 1996.

In 2017, Hamilton was signed by the Wolverines. In February 2019, he joined the XFL's DC Defenders as their head coach and general manager for the 2020 XFL season. In April 2020, he was hired by the Los Angeles Chargers to be their quarterback coach for the 2020 NFL season.