Patrik Schick is a Czech professional footballer who plays as a forward for the German team, Bayer Leverkusen, and internationally for the Czech Republic national football team. He made headlines in June 2021 after scoring a ridiculously audacious, perfectly weighted goal from the halfway line in a 2-0 win for the Czech Republic against Scotland at the Euro 2020. Doing so, he set a record for the longest goal at a Euro since 1980.

Schick remained with Prague until 2016 during which he made four appearances. Before he departed from the club, he had spent a season with the fellow capital-based team, Bohemians 1905. He netted 8 goals in 27 outings for Bohemians before exiting the club to join the Italian side, Sampdoria in June 2016.

In his first Italian tournament campaign, he appeared in 32 Serie A games and scored 11 goals for La Samp. He was nearly signed by Juventus but the club later backed because of some medical issues. On August 29, 2017, Schick joined AS Roma with whom he would have a disappointing first season, scoring only 8 goals in 58 appearances.

He then moved to Germany to play for Bundesliga competitor, RB Leipzig. He scored his first goal for the German side in their 3-2 defeat against SC Paderborn on November 11, 2019. In total, he was featured in Leipzig's 22 games during which he found the net on 10 occasions.

He checked into his current team, Bayer Leverkusen after the end of the season 2019-20. He has been selected as their regular forward for much of the games since his arrival and to date scored 9 goals across 29 league games. The Prague-born marksman was called up for national duty at Czech Republic's pre-UEFA Euro 2016 training camp. Since then he has found the net on 13 incidents across 27 games.

Leverkusen's number 14 has hit close to $20 million in career earnings as far as the sources report. Added to that, there are also some benefits and additional stipends to consider. Despite statistics differing each other by as much as hundreds of thousands of dollars, they still agree Schick's as of yet net worth lies around $5 million- $10 million. His existing contract runs until June 2025 and that's an additional $25 million (more or less) joining his salary history - totally impending in the form of wage set by his current team, Bayer Leverkusen (about $6 million and change a year, throughout the next four seasons).

That said, if he makes it through the season 2024-25 with the Germans, he is expected to outreach $40 million by the closure of his present agreement.

His career earnings entail $80,000 he made playing for his nation's team, Sparta Prague, another one and a half million dollars in exchange for the time he had spent in Sampdoria, over $10 million from AS Roma, and the courtesy of Leverkusen's $6.5 million in salary for the season 2020-21.

The Czech forward is married to Hana Behounkova. It is believed he has been with Behounkova since 2014 or even earlier. As for the followers, the pair have been spotted together from Schick's first-ever Instagram post. She continued to make her appearance on the footballer's Insta over the following several activities. 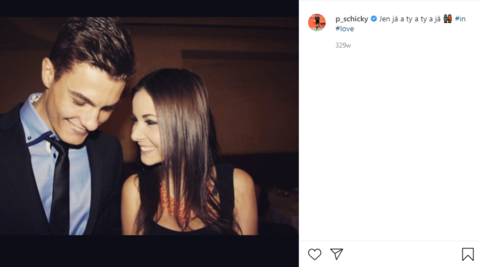 The forward, though, decided to go public with Behounkova on February 22, 2015. Schick shared a picture of himself and his girlfriend, subsequently captioning the imaging with, "Just me and you and you and me, #in #love."

The former Czech talent of the year and his partner, announced their engagement on August 18, 2019, once again through @p_schicky. Patrik Schick during his wedding with Hana Behounkova SOURCE: Instagram

Almost a year later, Schick and Behounkova tied the knot on July 22, 2020, and celebrated the birth of their daughter, Victoria in December 2020.