Patrick Willis is a well-known retired American football player. He played as a linebacker for the San Francisco 49ers in the National Football League. In 2021, the 49ers inducted him into the Hall of Fame. Patrick was named in the First-team All-Pro five times.

Patrick Willis was born Patrick L. Willis on January 25, 1985, in Bruceton, Tennessee. He is the biological son of Ernest Willis and his wife, Loretta Lynn Anderson. After graduating from Hollow Rock-Bruceton Central High School, Willis enrolled at the University of Mississippi. Patrick stands six feet and one inch tall and weighs 109 kg.

Patrick Willis has an estimated net worth of more than $10 Million. He has accumulated most of his net worth through his successful career in NFL. Patrick signed a $12 MIllion contract for three years in 2007 with the San Francisco 49ers. He took home $4,150,000 as his combined earnings as a signing bonus and salary. 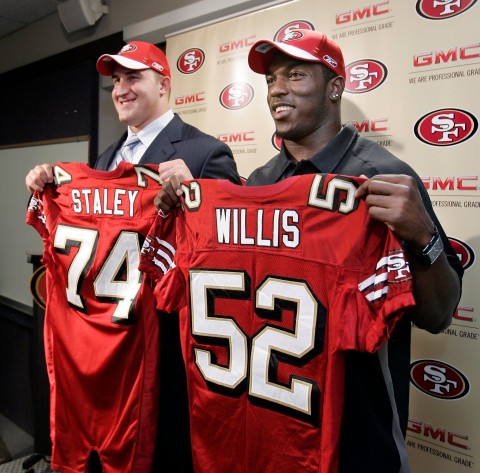 Patrick shares a photo from the unveiling day's SOURCE: NFL

Patrick started playing American football from a very early age. He was a two-time All-State selection, Regional Most Valuable Player. While playing for the University team, Willis was named twice in First-team All-SEC, All-American and won Butkus Award, Jack Lambert Award, and a few more. Willis listed his name for the 2007 NFL draft.

San Francisco 49ers drafted him in the first round with the 11th overall pick in the 2007 NFL Draft.  He signed a seven-year, $53.51 million contract with the 49ers in the 2010 season and became the highest-paid inside linebacker in the NFL. Patrick was named in the NFL tackles leaders twice in 2007 and 2009. He was part of the Pro Bowl team from 2007 until 2013. The Player was named into the NFL Defensive Rookie of the Year.

In 2009, Patrick won the Butkus Award after making it to numerous NFL teams. In 2013, Willis underwent surgery to repair a fractured hand he suffered during training camp. He ended the 2013 season with 104 tackles. In the early 2014 season, Patrick played in six games and underwent season-ending surgery on his nagging left big toe. In March 2015, Patrick announced his retirement. Willis is inducted into the San Francisco 49ers Hall of Fame.

Who is Patrick Willis Married To? Know About His Wife and Relationship

Patrick is a married man living a happy married life along with his wife. Patrick tied his wedding knot with his longtime girlfriend, Shenae Saifi. The duo got engaged in 2012 and walked down their wedding aisle shortly after that. Willis is very much private regarding his live life and relationship. He does not share a word on his social media about his wife.