Jared Seth Jones, better known as Seth Jones is an American professional ice hockey defenseman and alternate captain who is signed to the Columbus Blue Jackets of the National Hockey League (NHL). At the 2013 NHL Draft, he was selected fourth overall by the Nashville Predators. Internationally, he has represented the United States in various tournaments.

Arlington, Texas native, Jones was born on 3rd October 1994, under the star sign Libra. He is the middle child born to Amy and Ronals "Popeye" Jones, NBA player turned coach who is currently serving as an assistant coach or the Philadelphia 76ers. His elder brother's name is Justin while Caleb, an Edmonton Oilers' ice hockey defenceman is younger.

How Much Is Seth Jones' Net Worth In 2021? Salary & Contract

On 10th July 2013, Seth Jones signed a 3-year contract worth $9.675 million with Nashville, which happens to his first NHL contract.

Reportedly Seth Jones is dating Augusta Price. Many online tabloids have released their picture but not their relationship details. Also, there is a single photo of Augusta on his Instagram. Seems like the couple is maintaining their relationship low-key or might have already broken up. 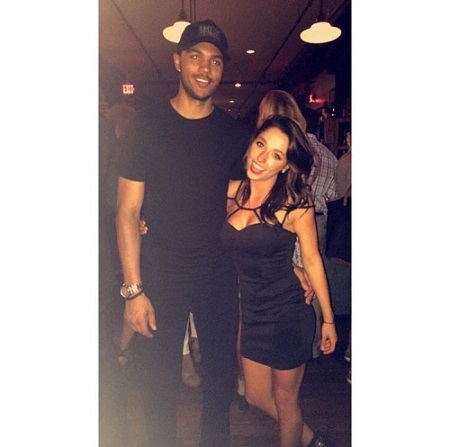 On the other hand, Jones is often seen posting his beautiful mother on his Instagram. This Mother Day, he shared a picture with his mom with such as heart-touching caption, " Wouldn’t trade our relationship for anything. Thanks for always being by my side, mom. Happy Mother’s Day."

On 3rd October 2012, Jones made his NHL debut with the Nashville Predators against the St. Louis Blues. On 12th October 2013, he scored his first NHL goal against Evgeni Nabokov of the New York Islanders.

On 6th January 2016, Jones was traded to the Columbus Blue Jackets in exchange for Ryan Johansen. On June 29, 2016, as an impending restricted free agent, he inked to a long-term extension to remain with the Blue Jackets. During the 2017–18 season, Jones developed into one of the Blue Jackets' top defensemen, playing an average of 24:36 minutes per game.

In February 2020, Jones was placed on a long-term injured reserve after undergoing ankle surgery. On 18th June 2020, he came out of the injury list and deemed eligible to play in the Stanley Cup playoffs.