Allen Bernard Robinson II a.k.a. Allen Robinson is an American football wide receiver who is signed to the Chicago Bears of the National Football League (NFL). Finished his collegiate career at Penn State, he was picked by the Jacksonville Jaguars in the 2nd round of the 2014 NFL Draft and played four seasons.

How Much Is Allen Robinson's Net Worth In 2021? Salary, Contract, & NFL Career Earnings

Alyssa Sorto is the hot NFL wag who is in a relationship with Allen Robinson II. The couple started dating in 2018 and growing stronger each passing day. 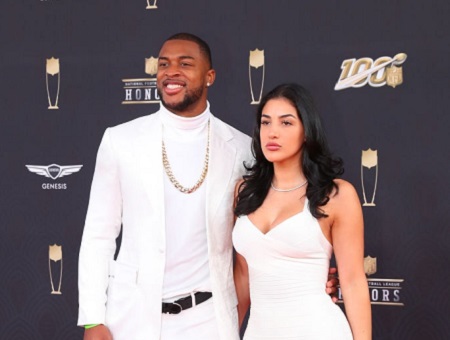 Sorto was born on 6th September 1991, in North Bergen, New Jersey; to Jaime and Maritza Sorto, She has one elder sister Melissa Sorto (b. 1985) now Melissa Orozco. Further Sorto attended Bronx River High School and is nowadays a model.

Robinson enrolled at St.ary's Preparatory where he played football for the school team leading the Eagles to the Division 3 State Championship as a senior.

On 29th November 2010, he committed to Penn State over the offers from Minnesota, Buffalo, and Toledo. During his college stint, he 2012 Consensus All-American, 2X Richter-Howard Receiver of the Year, and 2X First-team All-Big Ten.

In the 2014 NFL Draft, the Jacksonville Jaguars picked Robinson in the second round with the 61st overall pick, becoming the 11th wide receiver selected that year.

In the Jaguars' season opener on 7th September, he caught his first career pass from Chad Henne for no gain in a 34–17 loss to the Philadelphia Eagles. Robinson finished his rookie season with 48 receptions for 548 receiving yards and two touchdowns while starting eight games and playing in ten.

After Robinson and Allen Hurns both had breakout seasons in 2015 with over 60 receptions, 1,000 receiving yards, and 10 touchdown receptions each, they were nicknamed "Thunder and Lightning" and "The Allen Brothers"

Robinson finished the 2016 season with 73 receptions for 883 receiving yards and six receiving touchdowns. He spent the 2017 season recovering from his injuries.

On 14th arch 2018, Robinson signed with the Chicago Bears. Robinson finished the 2019 season with a career-high in receptions with 98 for 1,147 receiving yards and seven receiving touchdowns. On March 9, 2021, the Bears placed the franchise tag on Robinson.