Patrick Rodger is an American professional golfer who competes on the PGA Tour. Turned professional in 2014, he reached his career highest ranking No.94 on 27th December 2015. He finished his collegiate career at Standford University.

Avon, Indiana native, Patrick Rodger was born on 30th June 1992, under the star sign Cancer. He is the son of Charlie Rodgers and Judy Rodgers. The twenty-eight years old stands 6 ft 2 in (1.88 m) tall and weighs 185 lb (84 kg; 13.2 st). He holds an American nationality and is of white ethnic background.

How Much Is Patrick Rodger's Net Worth?

As of 2021, Patrick Rodger's net worth is approximately $5 million. His significant source of earning is his golf career. His total career earnings is given below the table.

He has signed a multi-year endorsement with Nike.

Besides, there is no information about his real estate or investment.

Married To Jade Olivia Gordon: Do They Have Children?

Rodger and Jade began dating in December 2016, coming out publicly in 2017. Jade Olivia Gordon is a British stunt coordinator and film assistant. 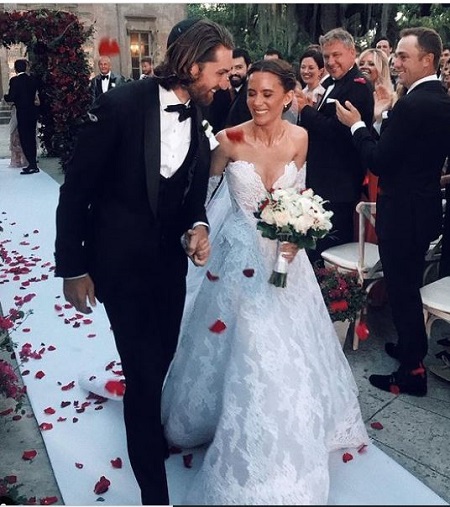 Rodgers began playing golf at the age of four at Avon High School. After that he played college golf at t Stanford University, for three years, winning 11 times, tying the record set by Tiger Woods.

Turned professional in 2014, Rodgers competed on the PGA Tour through sponsor's exemptions. He concluded that season being 58th in the Finals, earning enough to get his 2015 Web.com Tour card.

For 2015, after T40 at the Memorial Tournament, he earned "Special Temporary Member" status on the PGA Tour. For 2015-16, he received a PGA Tour card. he was not allowed to compete in the 2015 Web.com Tour Finals.

In the 2016 season, he began with top-20 finishes in his first four events. He qualified for the FedExCup Playoffs for the first time in his career, He ended 2016 ranking 62nd in the season-long standings.

His 2017 season was worse than 2016. Despite the tragic finish, he recorded his career-best finish on the PGA Tour and gained enough FedExCup points to secure he would keep his card for the 2017-18 season.

Rodgers came close to victory his first PGA Tour title, in the final event of 2018 following firing rounds of 61-62 at the weekend of the RSM Classic to enter a playoff with Charles Howell III. He got defeated in the playoff on the second extra hole.