Patricio Freire is a rising Brazilian Mixed Martial Artist. He is ranked in number one Featherweight Fighter outside of the UFC. Freire is currently the Bellator Lightweight World Champion. He has been at the peak of his career for a long time.

Patricio Freire was born on July 7, 1987, in Natal, Brazil. He is among the two children born to his parents. Freire is yet to share information about his parents with the media. He has a brother named Patricky Freire. His brother is also a  Bellator Lightweight World Champion. Freire has not shared his education and academic qualification.

Patricio Freire Net Worth and Salary

Patricio Freire has been active for almost two decades. He has been earning in six-digits yearly. However, The exact net worth of Patricio is still under investigation. Freire took home a flat $200,000  in 2019 from his match with Juan Archuleta.

Patricio is at the peak of his career. He will be adding much more in the days to come. In 2020, Freire earned a total of $110,000 in a match with Benson Henderson.

Patricio Freire started his career at the age of ten. He joined Brazilian jiu-jitsu training and started to climb the ladder of success—the MMA Fighter trained along with other famous MMA stars like Wanderlei Silva and Mauricio Rua. In 2004, Freire made his professional debut at the age of sixteen. 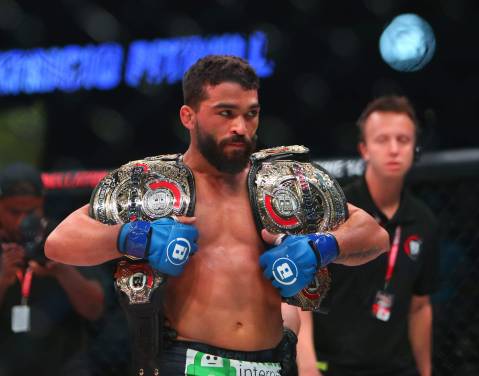 Patricio initially started his career competing in various MMA fights. He remained unbeaten in his first twelve games. Freire gained international fame and was ranked among the top prospects outside the North American fight scene. Patricio made his American debut on April 22, 2010. He won the first game in his first-round through submission.

Freire lost his first game in 2010 by controversial split decision. He went on to win his first title of Bellator Featherweight Championship defeating Pat Curran in 2014. However, Before that, He has had many ups and downs in his career. Following the title win, He remained at the top for next year and then lost to Straus.

In 2016, Freire went on to win the Bellator featherweight championship at Bellator 178 on April 21, 2017. Freire won the bout via guillotine choke early in the second round. In 2019, The MMA Fighter signed a multi-year deal with Double Champion. He went on to win his few matches. In March 2020, Freire was expected to defend this title with Pedro Carvalho, but the event was canceled due to COVID-19 Pandemic.

Patricio Freire is living a happy married life along with his wife and his family. Patricio is married to his longtime girlfriend, Teresa Silvia Freire. The love birds have been married for almost seven years. The duo has been dating for several years before tying their wedding knot. 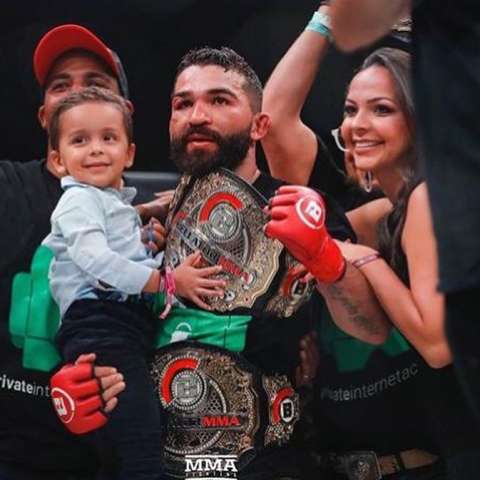 Patricio Friere along with his wife and son SOURCE: MMA Fighter

The duo had a private wedding ceremony. Only a few members from both the families and some close friends attended the ceremony. Soon after the wedding, the love birds were blessed with a son, Davi. The family of three extended to four, welcoming Miguel in 2020.