Paige Bueckers is a rising American college basketball player. She is playing in the Big Eastern Conference for the University of Connecticut's women's basketball team, UConn Huskies. Paige was part of the U19 Gold Medal Winning team in the FIBA U19 Women's World Cup. Bueckers was the Basketball Female Athlete of the Year in 2019.

Paige Bueckers was born on October 20, 2001, in Edina, Minnesota. She is among the four children born to Amy Bueckers and her husband, Bob Bueckers. Paige stands five feet and eleven inches tall and weighs sixty-four kgs.

Edina Native Paige started playing basketball as early as five years old. She draws her inspiration from her father as he coached her until seventh grade. Bueckers idolized LeBron James and Kyrie Irving while growing up as a kid. By class seven, she played for the tenth grade, and in the following year, Paige made it to the Hopkins Varsity team. 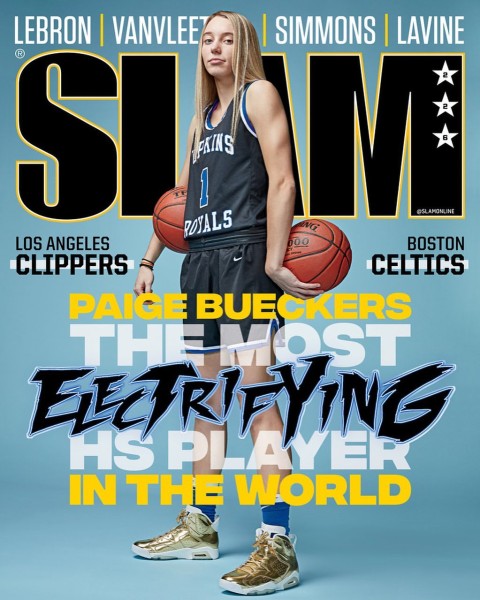 In her freshman year, Paige made the Class 4A All-Tournament Team. In her Sophomore year, She was sidelined with an ankle injury, hurting her up to that point in the season. Bueckers was recognized as Minnesota Gatorade Player of the Year for athletic excellence, academic achievement, and exemplary character. In her junior year, She won numerous awards and was one of the three finalists for the Gatorade National Player of the Year.

In her senior year, Bueckers became the first female high school player to be featured on the cover of basketball magazine Slam. She won more than half a dozen of awards in her senior amid COVID Pandemic canceled many finals. Bueckers was a five-star recruit and ranked the number one player in the 2020 class by ESPN. Almost dozens of high-ranked universities approached her with several scholarships, but she chose to remain with the University of Connecticut.

In December 2020, Bueckers made her collegiate debut and earned 17 points, nine rebounds, five assists, and five steals against UMass Lowell.  She was named the most outstanding player (MOP) of the tournament. Bueckers was also a unanimous First Team All-Big East and Big East All-Freshman Team selection. Many expect her to turn pro in the upcoming season but WMBA rules do not allow that.

Besides her college career, Paige has already won four gold medals for the national team. She won her first international gold medal in 2017 at FIBA Americas U16 Championship. In 2018, The basketball player won two gold medals at FIBA U17 Women's World Cup and Youth Olympic Games.

Paige is living a single happy life on her own. She is very much early in her career and must be focusing on her career rather than spending time with people. Bueckers is among the top prospects in NBA Women's basketball. Paige spends most of her free time training and with her friends.

Paige has two younger brothers, Ryan and Drew, and a younger sister, Lauren. Her father played high school basketball as a point guard, and her mother represented the University of St. Thomas in Cross country and track and field. 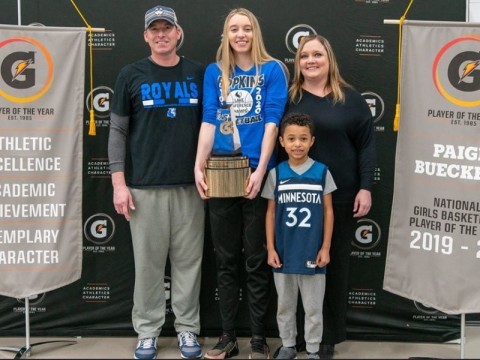 CAPTION: Paige along with her parents and brother SOURCE: Gatorade

When Bueckers was three years old, her parents divorced. She remained with her father while her mother remarried and moved on. After graduating from Hopkins High School, She enrolled at the University of Connecticut.