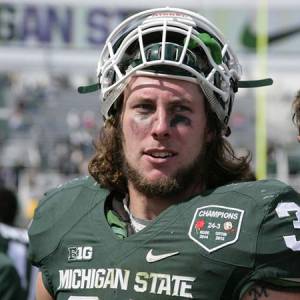 Riley Bullough is an American professional football player who plays in the National Football League (NFL). As of 2019, Riley Bullough currently plays for the Tampa Bay Buccaneers as their Middle Linebacker after being signed an undrafted agent in 2017. He played college football at Michigan State.

Riley Bullough reportedly earns around $555,000 as his yearly salary from Tampa Bay Buccaneers and has an estimated net worth of over $1 million in 2019.

Riley Bullough's Net Worth and Salary

As of 2019, Riley Bullough has an estimated net worth of over $1 million which is same as that of Damontae Kazee.

Prior, DeSean Jackson is in the list of the highest earners of the Tampa Bay with estimated earnings of over $69 million.

The details regarding the relationship status of Riley isn't being disclosed on the media but in one of his Instagram post, he shared a photo with a girl. It isn't confirmed but she might be his girlfriend since he looks happy with her.

Besides, there aren't any information which suggests that Riley is a married man or engaged since he hasn't revealed about his personal life on his social accounts. The 26 years old NFL player is quite focused on his career since he is at the beginning of his career. Bullough is not only a world-class athlete but also has a very attractive individual.

Other than being a famous NFL Middle Linebacker, Riley Bullough is pretty famous in social media. The Famous NFL star is 6 feet 2 inch in height and weighs around 103 kilograms.

As per his wiki/bio, Riley Bullough was born on November 23, 1993, in Traverse City, Michigan, United States to parents Shane Bullough and LeeAnn Bullough. As per his nationality, he is American and belongs to the White ethnic group and his star sign is Sagittarius. He grew up along with his brothers Max Bullough, Byron Bullough.

Riley is from a sports family since his brothers and father also played football.

Riley Bullough started his NFL career on May 1, 2017, after being undrafted in the 2017 NFL Draft by the Tampa Bay Buccaneers. Later he was promoted to the active roster in September. 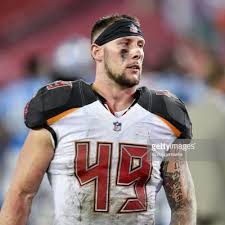 During the 2018 season, he got injured and was paced under injured reserve, but was later re-signed to the active roster on October 22, 2018. Currently, he is playing alongside Lavonte David, the alternate captain and also the famous quarterback Ryan Fitzpatrick.