A native of Würzburg, Germany, Kleber was born on January 29, 1992, under the star sign Aquarius. The hunk holds German nationality. On October 21, 2017, he made his NBA debut with Dallas Mavericks against the Houston Rockets. On 10th July 2019, he re-signed with the team.

Three seasons in the NBA has earned Kleber $10,193,857. Before joining the NBA, he played for the Spanish and German league. According to the source, the players in the European leagues get paid anywhere between $65,000 and $100,000.

Looking-over his contract and salary, his net worth is 2019 is estimated at over $8 Million.

No. 42 – Dallas Mavericks' Power forward / Center is currently in a relationship with his girlfriend, Brittany Gibson. The two started dating since 2018.

An Instagram sensation, Gibson is a former cheerleader of Texas Christian University who currently is an investment real estate specialist. She co-owns Lockson Investment Group.

Gibson's Instagram is full of couple's adorable pictures while the NBA player has not shared even a single photo with his bae.

In March 2019, he and his girlfriend walked the blue carpet of Dallas Mavericks' event Mavs Ball for charity. The event was attended by current and past Maverick players, including Dirk and his wife Jessica Nowitzki, Luka Doncic, and his partner Anamaria Goltes and many more.

When Kleber is new in NBA, fans get often confused him with Luka Doncic. When the team Mavericks head to the arena on the road, fans are lined up outside the team's hotel, looking autographs from the likes of Luka Doncic and Dirk Nowitzki or so they thought. 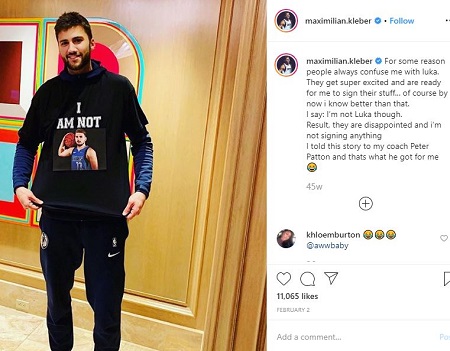 It went to the point where Mavericks coach Peter Patton had to let everyone know.

But now, he is an NBA superstar who gets easily recognized on his own.