The resident of Colorado, United States, Jenny Canvar, reportedly earns around $75,000, as her yearly salary from the network. As of 2019,  she reportedly has an estimated net worth of over $1 million. Cavnar is currently married to her longtime boyfriend Steve Spurgeon and has a son named Vincent living with them.

The American sportscaster/anchor Jenny Dee Canvar has an estimated net worth of $1 million. As of 2019, the reporter receives an annual salary of $75,000 from her successful reporting career with the Colorado Rockies.

According to Forbes' annual list of values for baseball teams released on Tuesday, the Colorado Rockies are worth $1 billion. The value of Colorado was up 16 percent from 2016 when the publication valued the team at $860 million.

Jenny is one of the broadcasting industry's most popular names. She was able to draw the attention of people to her shows with a delightful personality. In addition, she has worked with various networks to collect net value and earn a substantial salary from her career.

Jenny got married to her boyfriend Steven Spurgeon. They married after being in a romantic affair for a long time in 2014.

Her husband Steven is a former pitcher in the White Sox organization who currently serves as a pitching coach at Colorado Christian University and in the Mile High Collegiate. 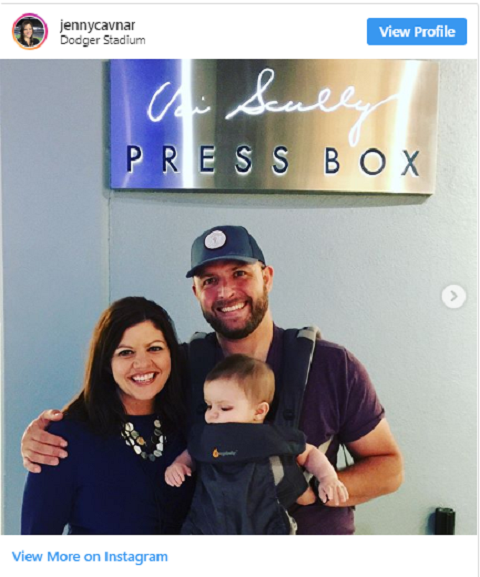 Jenny Cavnar with her husband and child
SOURCE: Instagram

The couple is blessed with a son named Vincent who was born in late 2017. The couple is living a happy married life since there are no rumors of their separation or divorce. Currently, she is residing in Colorado, United States, along with her husband/spouse and child, and has a beautiful home there.

Besides, they have a pet dog named Bodhi. The dog is of Vizsla breed which is a medium-sized hunting dog, originating in Hungary, with a short, smooth, rusty-gold coat and a docked tail.

Jenny has a supportive family and in her early days, her father inspired her to be like the famous sports reporter Melissa Stark.

Jenny Dee Canvar was born on July 16, 1982, in Aurora, Colorado to Steve Canvar and Donna Convar. Jenny is of American nationality and belongs to the White ethnic group.

Jenny's father Steve is a Hall of Famer and her brother is a coach in high school basketball. Jenny completed her schooling from Smoky Hill High School where she played softball.

After that, she attended Colorado State University from where she achieved a Bachelor's degree in communications and marketing. Moreover, Jenny played for the University team.

Some of the female famous graduates from Colorado State University are Becky Hammon who is also the first female assistant in NBA and Amy Van Dyken (the first American female who is a four gold medal winner in one Olympics games).

In addition, Canvar also served as a full-time gig for the San Diego Padres until 2011 and she is popularly known among few females in MLB for her play-by-play announcement in a regular game.