George Bodenheimer is the former president of ESPN Inc.and the sports division of ABC, known as ESPN on ABC. He also served as the executive chairman of ESPN from 2012 to 2017 and was replaced by John Skipper. Currently, he is Member of the Board of Directors of Sirius XM Radio Inc and also works as an advisor for ESPN.

The resident of New York City, George Bodenheimer, reportedly earns around $3 million, as his yearly salary from the network, and as of 2018, he reportedly has an estimated net worth of over $25 million. He is currently married to wife Ann Bodenheimer and has 3 children with her.

George Bodenheimer was born on May 6, 1958, in New Canaan, CT. Born to Julian and Vivian, his family moved to  Halsey Drive in Old Greenwich in 1963, where his father was the manager of C.O. Miller.

He also has a sister Sue who won a state doubles tennis title at Greenwich High School.

He holds an American nationality and belongs to White ethnic group. Further, his star sign is Taurus and reportedly there isn't any information regarding his early childhood, parents, and siblings in recent time.

Talking about his education, he is a graduate of Denison University with a degree in economics.

George Bodenheimer Net worth and Salary

George Bodenheimer is the adviser of ESPN, Inc. who has an estimated net worth of $25 million. Previously, he worked as a chairman of the ESPN network and ABC network, earning a significant amount of salary from the network.

Bodenheimer started working for ESPN in 1982. His salary during that time was reported to be $8,000 a year

George Bodenheimer is a pioneer of the ESPN and the cable industry and has led an unprecedented period of global growth as long-term president of the company( 13 years, 1998-Dec. 31, 2011).

He supervised all of The Walt Disney Company's multimedia sports assets from 3rd March 2003 to 31st December 2011 and was co-chairman of Disney Media Networks from 20 April 2004 to 31 December 2011.

In January 2012, he took over the position of Chairman of ESPN, Inc. During his tenure, he gave strategic direction to the global business of ESPN until he left the company on 31 May 2014.

From 18 December 2017 to March 2018, Bodenheimer returned to the company as Acting Chairman to provide interim leadership as ESPN identified Jimmy Pitaro as the successor to John Skipper.

During his career at ESPN, he played a strategic role in the development and distribution of ESPN domestic networks, including ESPN2, ESPN Classic, ESPNEWS, ESPN Deportes and ESPNU, and ESPN The Magazine, ESPN.com, and ESPN Radio.

Prior to becoming President, Bodenheimer was responsible for affiliate sales, advertising sales, marketing and research for all ESPN domestic networks.

Exploring his personal life, Bodenheimer is currently married to his lovely wife Ann Bodenheimer since 1984. Further, Ann and her husband have three children together; Kate, 30, George Jr., 28, and James, 26.

He met his wife, Ann Pugliese, Texas-based Connecticuter working as a sales assistant for a satcom company in Dallas, in Southwest.

Their eldest child Kate is an actress while George is a manager and the youngest, James is a manager at a Tesla Motors store and also a scouting assistant with the Atlanta Falcons. 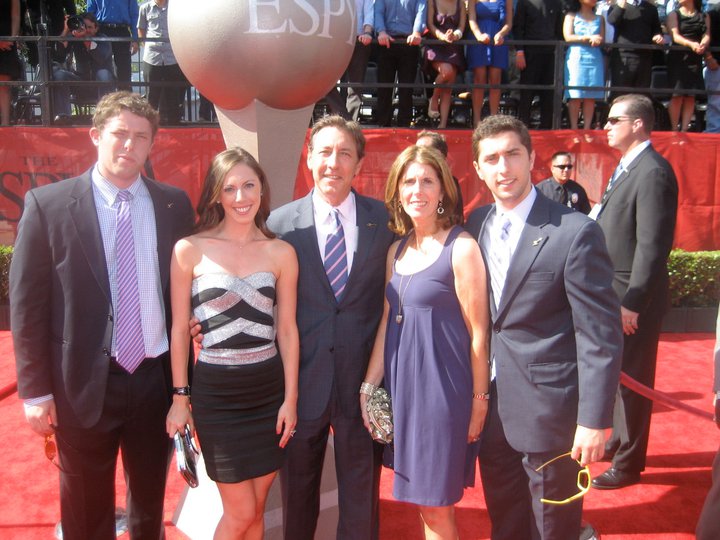 The couple currently live in New Canaan where they raised their three children.