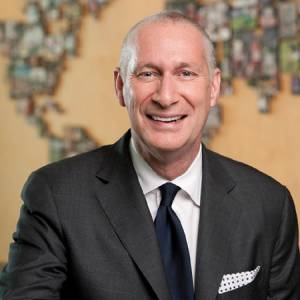 Sports Emmy Award Winner, John Skipper is an American businessperson who serves as the president of the ESPN Inc. as well as the Co-Chairman of Disney Media Networks as of January 1, 2012.

Upon finishing his studies, he started working as a secretary for Rolling Stone. Later on, he also worked for Us and Spin before holding the position of senior vice president of Disney Publishing Group.

Skipper has been associated with the ESPN for 20 years, starting his career in 1997 as a senior vice president and general manager of ESPN the Magazine. He led ESPN Magazine to a phenomenal success. Moreover, he played a vital role in the creation of ESPN Insider and initiator of ESPNW and ESPN Deportes.

Skipper has frequently made his appearance in the several media and cable industry including CableFAX Magazine, Business Week and The Sporting News. Due to his accomplishments, Sports Business Journal rated Skipper as the third most influential person in all Sports Business.

Since started working for an ESPN, Skipper has held the leadership position in the network to a series of long-term, multi-platform agreements with major rights holders including NBA, MBL, the College Playoff, US Open Tennis, Rose Sugar, and Orange Bowls.

Skipper married Jessica Skipper after having an affair in 1984. They organized their wedding in the presence of some important friends and relatives in North Carolina. The couple is proud parents of two handsome sons.

Their elder son Nicholas Huntley was born on December 3, 1985, and son Clay Raymond born in 1989. Nicholas completed his graduation from Davidson College in North Carolina and currently serves as a accounts manager in Nascar’s broadcasting and resides with his wife at New York whereas Clay graduated from Vanderbilt and serves as a writer for GQ.

Besides his professional career, Skipper also a philanthropist. He associated with several charitable institutions in the United States.

John Skipper has an estimated net worth of $20 million in 2018, including all of his properties and incomes. He is having an annual salary of $8 million from his profession. Arguably, Skipper has maintained a pretty of bank balance through his dedication and devotion towards his work. Maximum of his net worth is built through his professional Journalism. He bought a house in Lenox Hill worth $2.31 million in 2015.