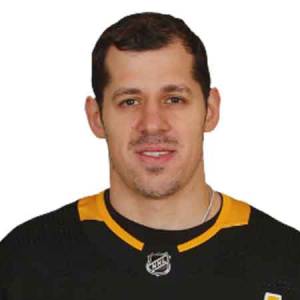 Evgeni Yevgeni Vladimirovich Malkin or famously known as  Evgeni Malkin is a professional hockey player who is currently playing and is the captain of NHL hockey team, Pittsburgh Penguins. He also represented Russia at the Sochi Olympics.

Furthermore, the hunk has an estimated net worth of $50 million. Regarding his personal life, the thirty-two years old is married and shares a son with his wife.

Evgeni Malkin’s Net worth and Salary in 2019

One of the top ten highest paid athletes in ice hockey, Malkin's net worth is estimated at around $50 million.

Further, he is reported to earn $ 350,000 through his endorsement deals with brands such as GoPro, Upper Deck as well as Framework, etc to name a few.

He is also a very kind person and has done several charitable works. He donated $30,000 for the treatment of Ivan Semochkin, his former youth teammate's wife when she was diagnosed with blood cancer.

Is Evgeni Malkin Married? Who is his wife?

Evgeni Malkin is rumored to have dated several women.  It was known that Evgeni was dating a girl named Kristina from Ufa but was not committed to the relationship, so later they broke up.

He also had an affair with a woman named Oksana Kondakova who was born in 1982 and was four older than him. But this did not let her relationship to blossom, the Russian player bought her an apartment located at the best locational area at the Moscow Russia.

After several years of being in a loving relationship with her, the woman wanted to marry him but Evgeni's family did not accept the marriage proposal citing that Oksana Kondova wanted to marry only for his money.

It was due to this fact the couple got split up in 2012 and he is currently married to  Russian TV host, Anna Kasterova in 2016. The couple tied the knot in America but later celebrated the occasion in Russia.

The couple is blessed with a son named Nikita born in May 2016.

Evgeni Malkin is of Russian nationality. He was born to mother, Natalia Malkin, and father, Vladimir Malkin in Magnitogorsk, Russia. He also has a brother named Denis.

His father, Vladimir is a former hockey player and encouraged his son to follow the same game he once played.

To become a hockey player, he was sent to a sports academy called Metallurg. He later joined the  Ural region ‘s youth hockey team at the age of 16 and become the major player of the team.

The team traveled to Canada to participate at the youth world championship and got the first position in the tournament.

After performing impressively at the World Youth Championship in 2006, he was later approached by National Hockey League( NHL).

He started his playing career with Pittsburgh Penguins and became a major for the American ice hockey team.

In 2013 it was believed his contract with the Penguins was terminated and signed a new contract worth to be $ 76 million. He helped the team win the 2017 Stanley Cup edging Sidney Crosby by 1 point.

Malkin’s Russian team had a disastrous result at the Winter Olympics at Sochi. Even though the Russan team had stars such as Ilya Kovalchuk and Alexander Ovechkin to name a few.

But the Russian hockey had a miserable and sad run at the tournament. However, it was reported that he is preparing for the 2018 Winter Olympics in South Korea.