Casey DeSmith is an American professional Ice-hockey player who plays in the National Hockey League (NHL). As of 2019, Casey DeSmith currently plays for the Pittsburgh Penguins as their goaltender.

DeSmith reportedly earns around $675,000 as his yearly salary from Pittsburgh Penguins. Further, he has an estimated net worth of over $500 thousand. Reportedly, he is in a romantic relationship with his girlfriend, Ellie Pikula.

Casey DeSmith was born on August 13, 1991, in Rochester, New Hampshire, the U.S. to parents Gary DeSmith and Patrice DeSmith.

He is American according to his nationality and belongs to the ethnic White group. Further, his star sign is Leo.

We might not be this cute anymore but we try our best. Missing my sisters on this #siblingsday ???

Further, he grew up along with his sister.

Casey DeSmith Net Worth And Salary

Further, the NHL player has an average salary of $675,000 annually while Sidney Crosby is among the highest earner of the team with the annual salary of $8,700,000. Casey DeSmith so far has made earnings of $1,012,834 from his entire NHL career.

His contract and earnings, including bonus and incentives:

Exploring his personal life, he is not married. However, he is in a romantic relationship with his girlfriend, Ellie Pikula. Further, it is unknown when the couple started dating.

As per his Instagram account, the couple seems to be happy in the relationship as he regularly posts a picture of him along with his girlfriend. The couple is living a happy life with no rumors of separation in recent time. 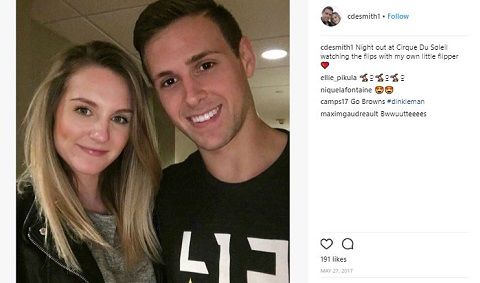 In 2014, DeSmith faced domestic abuse allegations while attending New Hampshire University.  As a result, he was suspended from New Hampshire Wildcats.

On 4 December 2014, DeSmith pleaded not guilty to all charges against him, with the exception of a disorderly conduct violation. He was sentenced to pay a fine of $124.

Talking about his body measurement, the Famous NHL star is 6 ft 0 in (183 cm) in height and weighs around 82 kg.

DeSmith signed a three - year, $ 3.75 million contract extension with Pittsburgh on January 11, 2019, during the 2018-19 season, having established himself in the backup role for the Penguins. Currently, he is playing along with his star teammates such as Evgeni Malkin, Nick Bjugstad and many more.