Oskar Sundqvist is a Swedish professional ice hockey player who plays in the National Hockey League (NHL). As of 2019, Oskar Sundqvist currently plays for the St. Louis Blues as their Center. Oskar Sundqvist has played for other teams like Skellefteå AIK, Pittsburgh Penguins.

Oskar Sundqvist has an estimated net worth of over $2 million. As a Center, Oskar Sundqvist reportedly earns around $700,000 as his yearly salary from St. Louis Blues. He is in a relationship with his girlfriend Klara since 2010.

Sundqvist so far has made earnings of $2,835,000 from his entire NHL career. The highest earners of the Blues is Vladimir Tarasenko having an annual average salary of around $7,500,000.

Oskar signed his first NHL contract with the Pittsburgh Penguins on June 5, 2014, for three years which was worth $2.775 million and later traded him to St. Louis. His first contract with the Blues was for a year worth $675,000 signed on July 2, 2017.

Oskar Sundqvist is reportedly unmarried but is in a relationship with his girlfriend Klara Norman. Oskar has been dating Klara since 2010 and they are happily living together. They both often posts the photo of the moment spent with each other on their social media account quite often.

5 great years with my love! You are the only one for me!!! pic.twitter.com/4MspmePLqC

So far there aren't any news or rumors which claims that Oskar is a married man, but it can be said that he is planning to get married soon with his girlfriend Klara since they have been in an affair for a long time. In addition to this, there isn't any information available regarding the past affair of Oskar Sundqvist.

Oskar Sundqvist is also pretty famous in social media with a huge number of followers. He is 6 feet 3 inch in height and weighs around 95 kilograms.

Oskar Sundqvist was born on 23 March 1994, in Boden, Sweden but the details about his parents and family life aren't available.

As per his nationality, he is Swedish and belongs to the White ethnic group. Further, his star sign is Aries.

Oskar started his playing career with the Skelleftea AIK in the Swedish Elite League. After that, he began his NHL career playing for the Pittsburgh Penguins on  31 May 2014. 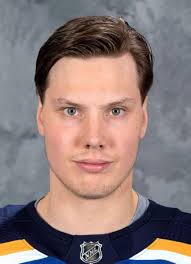 Currently, he is playing for the St. Louis Blues since he was traded by the Pittsburgh after the 2017 NHL Entry Draft. In addition to this, he is playing alongside famous centerman Tyler Bozak and also the left winger of the Blues Robby Fabbri.