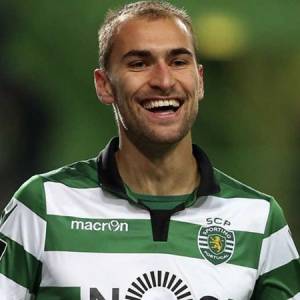 Bas Dost was born on May 31, 1989, in Deventer, Netherlands. His parents divorced when he played for SC Heerenveen. Dost belongs to white ethnicity and holds a Dutch nationality.

At the age of six, Dost began his career with the youth team of CVV Germanicus in 1995. He then joined the junior team of FC Emmen in 2001. After being promoted, he started playing in a senior team in 2007. Later, he scored his first goal on February 18, 2008, over BV Veendam. Further, he left the club in 2008 after scored 6 goals in 23 games.

Bas Dost then transferred to Heracles Almelo, worth £270k in 2008. Further, he left the club after spending two seasons in Eredivisie.

Bas Dost signed a five years contract with SC Heerenveen in 2010 with the transfer fee £2.48 million. He became the top scorer with 13 league goals in his first season with Heerenveen. Further, he left the club scoring 36 goals in 66 appearances.

VfL Wolfsburg official website revealed that Dost would be signing with the club on June 1, 2012, with worth £6.30 million and scored a goal in his debut match against VfB Stuttgart in 25, August.

For the club, Dost has spent five seasons with the club from 2012 to 2017 in Bundesligaliga.

Dost then signed with Sporting CP with the fee £10.67 million, in 2016, potentially raised to €12 million, and a buyout clause of €60 million. His first match was on September 10 against Moreirense F.C. So far, he has scored 46 goals in 45 matches for the team.

After representing his national team in U-21, Dost was called up to senior team Louis van Gaal in August 2012. Later, he played his first international match on 28, March as a backup player for Nigel de Jong. As of now, he has owns 15 caps for his national team. His current teammates are Davy Propper, Kevin Strootman, and Joel Veltman.

Dost is currently enjoying his relationship with his beautiful girlfriend, Annefleur de Leeuw, Training & Coaching of cycling. The couple is together since 2011 and till this date, there is no any news or rumors of their extra-marital affairs.

The couple first met in Groningen, where the Dost lived for a while when he was in SC Heerenveen. The pair is often seen enjoying their vacation in Australia and Mauritius.

His girlfriend, Leeuw has been honored with Women’s category of the cycling race “Bike Night Race” at the Estoril Autodrome. Bas Dost is 1.96 m tall (6 feet 4 inch) and 78 kg of weight.

Bas Dost's current market value is estimated at £14.40m. Currently, he uses a shoe model, ACE LEATHER TURBOCHARGE since March 31, 2017. His favorite brand is “Adidas." He owns an apartment in Wolfsburg, Germany.

While Dost was in Vfl Wolfsburg, he received £36,000 as a weekly salary; however, his current salary yet to disclose. His present net worth is estimated around €6 million.