Pablo Fornals is a Spanish professional footballer who is currently signed to the Premier League side  West Ham United as an attacking midfielder. Earlier, he played for Malaga and Villarreal. A full international since 2016, he has earned 4 caps and scored a goal for Spain National Team.

His current market value is €18 million. His highest market value to date is recorded €30 on 21st December 2018. A Nike athlete, Pablo's net worth in 2021 is approximately $2 million.

Is Pablo Fornals In A Relationship?

Pablo Fornals is off the market!! The attacking midfielder is in a relationship and bigger than that, he is ready for parenthood. Yes, Pablo and his girlfriend of five years Tania Lara are expecting their first baby together. 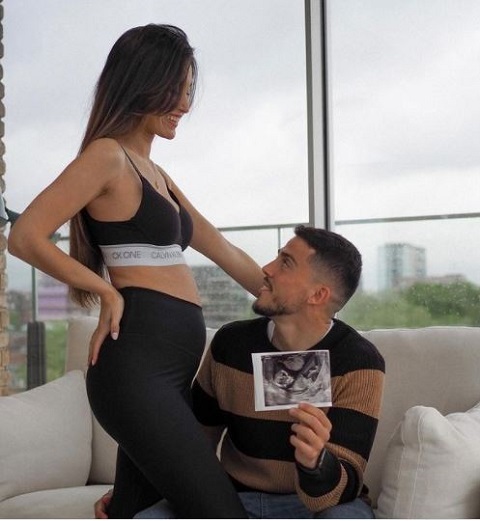 They shared the news on 22nd May via Pablo's IG post with him holding an ultrasound photo and Tania flaunting her baby bump. The caption on the post reads, "Tell me if happiness is not this."

In the 2014-15 season, Fornals made his senior debut with the reserves for Malaga B in Tercera Division.

On 26th September 2015, in his first competitive match with the first team in La Liga, he started in a 0–0 away draw against Real Madrid. Later two months and two days, he scored his first top-flight goal in a 2–2 draw with Andalusian neighbours Granada CF at La Rosaleda Stadium. Overall, he played 59 matches and scored 7 goals for Malaga.

On 13th January 2018, he scored for his new team their first-ever victory over Real Madrid at the Santiago Bernabeu Stadium (1–0). On 26 September 2018, he opened the scoring in a league fixture away to Athletic Bilbao in a 3-0 victory.

On 14 June 2019, Fornals signed for West Ham United on a five-year contract for a transfer fee reported to be £24 million. The deal made him the second-most expensive signing in West Ham United. On 10th August 2019, he made his Premier League debut in a 5–0 home defeat by Manchester City, entering as a half-time substitute for Michail Antonio.