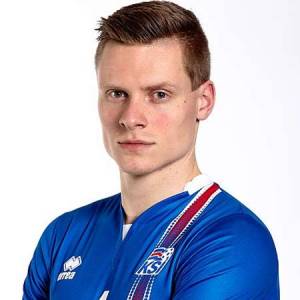 An Iceland, Country Origin and Sarpsborg 08 and Iceland representative player, Orri Sigurdur Omarsson primarily plays at defender. Born in Iceland, Omarsson played football for HK, AGF, and Valur. He played for Valur team between 2015-2018. In 2010, he made his international debut with the Iceland U-17 team. Omarsson grew up playing for HK’s youth team before being promoted to the senior team of HK in 2011.

Orri Sigurdur Omarsson was born on February 18, 1995, in Iceland. Omarsson belongs to white ethnicity and holds an Icelandic nationality.  Omarsson is private kind of person and has n’t shared his family details publicly.

Orri Sigurour Omarsson is the brand ambassador for Les Deux Fashion, 66°NORTH, and Adidas land. He often posts the product of Adidas on his Instagram page.

Currently, Orri Sigurdur Omarsson's market value is estimated at € 225 thousand. He receives around £23,000 as a yearly salary from his current club however exact figure of his net worth is yet to reveal. He has a good finance from his product endorsement.  Omarsson's wealth now has a momentum of its own and is set to accumulate even further.

A product of HK’s and AGF’s youth team, Sigurdur Omarsson began his career joining HK in 2001. Later, he left the club after playing eleven years in a youth team. He then joined the AGF U-19 team in 2012 while his market value was € 25k.

After being promoted, Orri Sigurdur Omarsson started playing in a senior team of HK in 2011. Before ending his career in a team, he represented his team in 20 games.

Orri Sigurdur Omarsson then moved to AGF on July 22, 2014, but he didn’t appear in any matches. He signed a three-year contract with an Icelandic athletic club, “Value” on January 1, 2015. For the club, he scored 1 goal in 65 games.

On January 22, 2018, Omarsson joined the Sarpsborg with the transfer fee of € 225 thousand. Omarsson is the agent of Total Football along with Runar Alex Runarsson. He has a contract with the team until  31, 2020, December.

The couple started dating in December 2016. Omarsson first saw his future girlfriend playing a football match and soon fell for her.

The pair is often seen in beautiful expensive destination enjoying their vacation. Omarsson also posted a photo of his girlfriend on their 1 year anniversary on December 19, 2017.