Orlando Galo is a native of Puntarenas, Costa Rica, and he is famous for playing as a defender for Herediano. Galo has been playing for Herrediano since he joined them on January 2, 2019. The young football player wears jersey number 2.

From an early age, Galo was interested in playing football and started training with the minor divisions of Alajuelense. Furthermore, Galo is current at the peak point of his career and is also doing really well. Galo has impressed many people with his amazing playing skills.

Beginning with his love life, Orlando is currently in a relationship with his beautiful girlfriend, Jimena Bogantes Dankers. It is unknown when they started dating, but their social media posts show that Galo and Dankers have been together for more than two years.

The professional footballer has shared numerous images with his girlfriend on his Instagram account. Dankers have also appeared in the games or Orlando to support him. From this, we can say that they are a powerful couple and support each other in every step of their life. 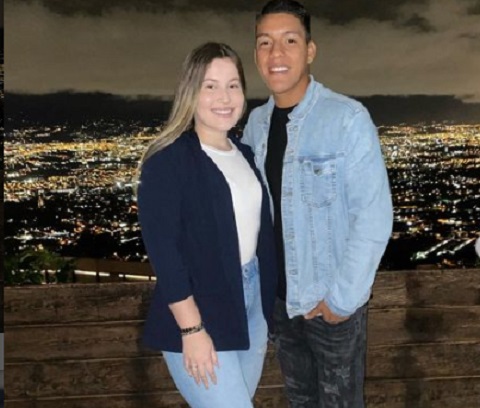 Likewise, Orlando has gone to visit different places along with his lover and featured their moments on social media. Orlando's girlfriend celebrates her birthday in the month of August, and the footballer also wished her a happy birthday by sharing sweet messages on IG. We can follow Orlando on Instagram as @orlando_galo to get more details about his love life.

The young footballer Orlando is in the early phase of his career and is still working hard to get more success. So, it can be said that Orlando is receiving a considerable salary by playing with Herediano. But his salary amount remains under investigation.

Apart from that, Orlando has already made his debut for the national football team of Costa Rica. And in Costa Rica, a football player has an average salary of CRC 6,711,455 and CRC 11,090,101. Apart from that, his net worth also remains unknown as none of the verified sources have shared the info.

Orlando Galo and his team during a match SOURCE: Instagram @orlando_galo.com

According to Transfermrkt, Orlando's market value at the current time is €300Th, and it will surely increase in the future.

As Orlando was interested in pursuing a career as a footballer, Orlando joined the minor divisions of Alajuelense and began training with them. On November 5, 2017, Orlando made his debut for the team by playing against Liberia at the Morera Soto Stadium for the opening tournament.

From 2018 to 2019, Orlando played with them and made 17 game appearances. And on January 2, 2019, he signed a deal with Herediano. On January 20 of the same year, Orlando made his debut for Herediano by playing against Limon.

Apart from that, he has also represented the Costa Rica U20 in 5 games. Later, he received a call from the senior team, and Orlando made his debut for the senior team on October 7, 2021, in a World Cup qualifier against Honduras.

More Details On His Parents & Height

Orlando Moises Galo Calderon was born on August 11, 2000, to his parents from Costa Rica. Orlando was raised in Puntarenas. Currently, the information about his parents and siblings is not accessible in the public domain.

So, talking about his height measurement, Orlando stands at an average height of 5 feet 9 inches (1.79 m).