Nkrumah Bonner is a well-known Jamaican cricket player. He has represented West Indies in international cricket. Bonner was an occasional leg-spin bowler and a top-order right-hand batsman. Nkrumah has been playing for Jamaica Tallawahs in the Domestic league since 2020.

Nkrumah Bonner was born Nkruman Eljego Bonner on January 23, 1989, in Saint Catherine, Jamaica. Nkrumah has a younger brother Jonathan Mitchum Bonner. He has successfully kept his personal life away from the reach of the media. Nkrumah has not shared a word about his parents and his educational qualification. Talking about his physical appearance, Bonner stands six feet and weighs 70 kg.

A career in the International Cricket

Bonner started playing cricket from a very early age. In the Caribbean nation's cricket is part of everyone's life. There is no home from which at least one family member would have played cricket in any phase of their life. The player started playing in the domestic league in 2009 along with Jamaica. The following year, He made his first-class cricket debut for Jamaica against Combined Campuses and Colleges in February 2011. 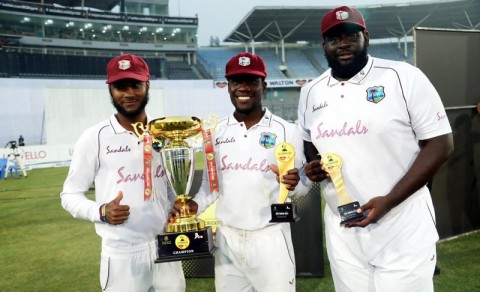 Nkrumah caught the eye of the West Indies selector team member and was called up for the T20I team. Bonner made his T20I debut in September 2011 against England. He did not have a good start to his career and then was selected for the game against Australia in March 2012. The player had to spend his next few valuable years playing in the domestic leagues. Bonner played for Jamaica Tallawahs from 2013 until 2016. Nkrumah joined the Leeward Islands in the mid-way and played with the team until the 2017/18 season.

Bonner moved to Jamaica and then to Jamaica Tallwahs in the domestic league. In October 2019, he was named in Jamaica's squad for the 2019–20 Regional Super50 tournament. The player was called for the West Indies Test Squad and tour to Bangladesh, but the tour got postponed for 2021, and he made his ODI debut in January 2021 against Bangladesh. In February 2021, He earned his Test cap against Bangladesh and has been awarded a central contract from Cricket West Indies after scoring 86 runs in his debut game.

Nkrumah is very private about his personal life. He has not shared a word with the public. Although Bonner is active in social media, his timeline is filled with photos of his games and own photos. He is believed to be living a happy married life, as we can see a child's photo in his profile. However, The player could be single and waiting for his life partner.

Nkrumah Bonner has an estimated net worth of more than $100,000. However, He has been playing professional cricket for more than a decade but spent most of his time in the domestic league. The salary of a cricket player ranges from $50,000 to millions. He will be adding a huge sum to his net worth in the future.