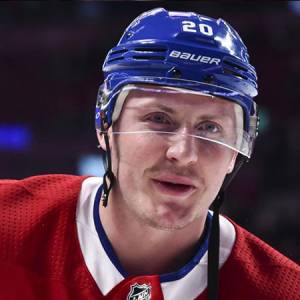 As a Left Wing, Nicolas Deslauriers reportedly earns around $950,000 as his yearly salary from Montreal Canadiens. Further, Nicolas Deslauriers has an estimated net worth of over $2 million. Nicolas is married to his girlfriend Joanie and has three children living with them.

Nicolas Deslauriers was born on February 22, 1991, in Québec, Canada. As per his nationality, he is Canadian and belongs to the White ethnic group and has a star sign is Pisces.

Details about his parents, siblings, family, and educational qualifications are not disclosed by media.

Nicolas Deslauriers Salary and Net Worth

As of 2019, Nicolas Deslauriers has an estimated net worth of over $2 million and Jordie Benn also has the same net worth. He reportedly signed a two-year contract worth $1,900,000 with Montreal Canadiens including a guaranteed sum of $1,900,000.

Deslauriers' career earnings in the table:

Besides his financial earnings, his personal assets include home, cars, and he also receives some amount from various sponsorships.

Nicolas Deslauriers is married to his girlfriend Joanie Godin after being in an affair for a long time. Nicolas married Joanie when he was just 21 years old.

In addition to this, there are no rumors and controversies regarding his past relationships/affair is not available on media. Nicolas has made tattoos on his shoulder in remembrance of his grandfather.

Deslauriers has a charming personality with a height of 6 feet 1 inch tall including her weight of 98 kilograms. He is not only a famous player but is also a social media star since he has a lot of fans following him on his official social accounts.

Nicolas Deslauriers started his playing career with the Rouyn-Noranda Huskies of the Quebec Major Junior Hockey League. In addition to this, he began his NHL career playing for Los Angeles Kings after being drafted in the 2009 NHL draft.

After playing three seasons with Kings he was traded to Buffalo in 2014 and later Buffalo traded him to Montreal Canadiens and recently he signed a two-year contract worth $1.9 million in 2018. Deslauriers played alongside another famous left winger Artturi Lehkonen of the Montreal.

Félicitations / congrats @mpeca on your first goal with the @canadiensmtl ?? #firstgoal

A post shared by Nicolas Deslauriers (@nicolasdeslauriers) on Nov 9, 2018 at 3:33am PST

During his time with Montreal, he got injured but after his return in the game against Buffalo, he made a goal assisted by Matthew Peca and he is currently playing under captain Shea Weber.