Nick Watney was born Nicholas Alan Watney on April 25, 1981, in Sacramento, California. Nick came from an average family so, much about his early life and his parents are still under the radar. He graduated from Davis Senior High School and enrolled at Fresno State University. He was a three-time All-America golfer. Watney stands six feet and two inches tall and weighs 82 kg.

Net Worth, Sponsors, and Career Earnings of Nick Watney

Nick Watney has an estimated net worth of more than $20 Million. He is ranked at No. 50 in the all-time money list of the PGA right front of Keegan Bradley and Jason Dufner. Watney must make six figures from his sponsorship and advertising deals with Titleist, Ralphlauren, Netjets, and a few more. In the ongoing season of 2021, Nick has earned $81,225 playing in twenty-one games. 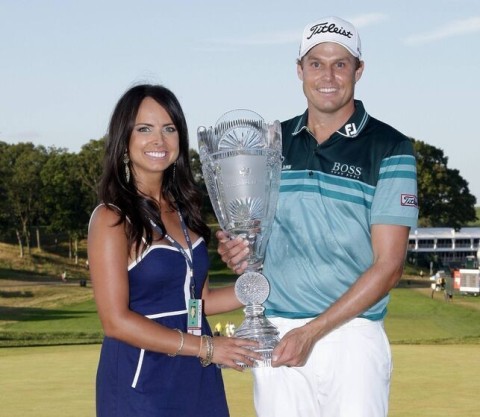 Nick shares a photo with his PGA title and his wife SOURCE: Sky Sports

Yes, You read that right. Nick is the proud father of four children. Nick walked down his wedding aisle along with his longtime girlfriend, Amber Watney, in 2010. They had been dating for more than a year before their wedding. In 2014, Nick and Amber welcomed their first child. The golf player likes to keep his personal life away from the media.

In 2019, the duo welcomed their youngest member in the family. Nick and Amber are the proud parents of four children. They sometimes take their children to watch the games.

Nick turned professional in 2003, right after graduating from the University. He won his first professional victory at the Lewis Chitengwa Memorial on the 2003 Canadian Tour. Watney made his PGA debut in the 2005 season and won his first PGA Tour title at the Zurich Classic of New Orleans. In 2011, Nick won one of his biggest titles at the WGC-Cadillac Championship, the first World Gold Championship.

In July 2011, Nick won his third PGA title at the AT&T National. He peaked at No.9 in World Golf, ranking the same year. The following season, Whatney won the Barclays Open, which is his last PGA title. Since then, He has had many ups and downs and is yet to secure another title-winning performance.