Nick Suzuki is a rising Canadian professional ice hockey player. He is currently playing in the NHL for the Montreal Canadiens as well as serving as alternate captain for the team. Vegas Golden Knights drafted him in the thirteenth overall pick in the 2017 NHL draft. Suzuki plays as a Centre for his team. Nick is also part of the Canadian national ice hockey team.

Nick Suzuki was born Nicholas Suzuki on August 10, 1999, in London, Ontario, Canada. He is the son of Rob Suzuki and his wife, Amanda Suzuki. He has a younger brother named Ryan Suzuki, a Canadian professional ice hockey forward currently playing as a prospect to the Carolina Hurricanes of the National Hockey League. Nick stands five feet and eleven inches tall and weighs 94 kg.

Nick started playing ice hockey from a very early age. He was part of his High School ice hockey team and represented Canada in numerous youth divisions. In the 2015 OHL Priority Selection, Owen Sound Attack drafted him in the first round, with thirteen overall picks. He made it to the OHL All-Star second team and won the William Hanley Trophy for the Most sportsmanlike player after scoring forty-five. In early 2017, Nick listed his name for the 2017 NHL draft. Vegas Golden Knights drafted him in the  1st round, 13th overall pick, and agreed to a three-year, entry-level contract with the Knights. He played with the Owen Sound Attack for the early days but returned with the team after getting eliminated from the playoffs. In September 2018, Suzuki got traded to Montreal Canadiens.

In 2019, Nick played a crucial role in helping the Storm win the J. Ross Robertson Cup for their sixth championship in franchise history that season. He made his AHL debut in October 2019 against Carolina Hurricanes. Suzuki has established himself as a prominent player for the franchise.

Who is Nick Suzuki Dating? Know About His Girlfriend and His Relationship Status

The Canadian Ice hockey player is very much open about his relationship. Following his Instagram timeline, we can be sure that Nick is dating his longtime girlfriend, Caitlin Fitz Gerald. They are the high school sweethearts. They have been dating for more than seven years. Nick first posted with his girlfriend in May 2017 at their Prom. 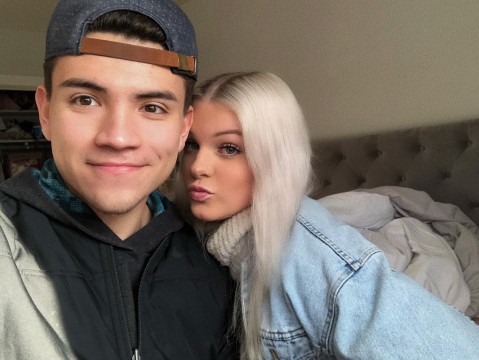 Nick and Caitlin are active social media users and keep sharing each other's photos regularly. Although, It's been a long time since their relationship, They are yet to get engaged or tie their wedding and must be planning for a lavish and wonderful wedding ceremony.

Nick Suzuki's Net Worth and Earnings

The Canadian player is very much early in his career and will be making millions in the future. Also, Suzuki must be receiving a handsome amount through the Canadian government for representing the national team in numerous international events.