If you love watching wrestling then, Nick Khan must not be a new name. Nick is better known as the President & Chief Revenue Officer of World Wide Entertainment/ WWE. He has been working with the industry for more than fifteen years and is a  former practicing attorney, transitioned to International Creative Management (ICM) in 2006.

Nick Khan was born in the early 1970s. He has not shared a word about his early life and his parents. Khan has a sister Nahnatchka Khan, an American television writer and producer.

Nick Khan has an estimated net worth of more than $10 Million. He credits most of his net worth to his successful career with WWE and his former life as a practicing attorney. As per sources, In 2020, Khan took home a whopping amount of $13 million, about three times McMahon's scanty $3.9 million. He had a base salary of $498,462, but his sign-on bonus is worth $5 million alone, while the stock awards go further up north to $6.8 million. 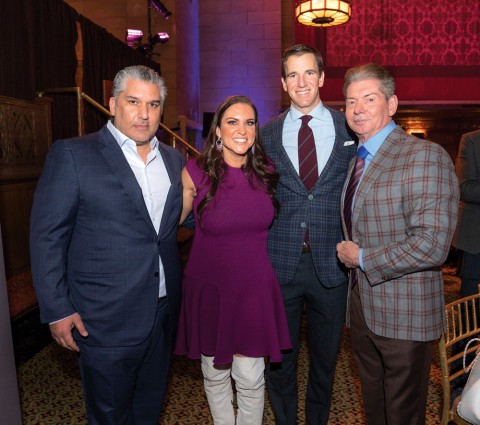 Nick attends an event with other WWE board members SOURCE: WWE

Nick was recently promoted as the company president and will be making millions from his contract and earnings in the future. The former president, Vince McMahon, had an annual salary of $3.9 million, including his $1.64 million stock award, a further $854,000 incentive, and the rest of the $20,583 compensation.

The WWE president has been living a lavish lifestyle throughout his successful career. Nick bought a huge mansion in May 2021 for a staggering $7.6 Million in the posh Riviera section of Pacific Palisades. The house spans 7,945 square feet and comes with five bedrooms and seven bathrooms. It includes a basement-level media room and a laundry room with double washers and dryers. It has a three-car garage equipped with a Tesla charging station.

Nick does not show any presence on social media. He has not shared a word about his relationship status and married life in public. Khan could be single, dating or even married to his wife and living a happy married life along with his wife and their children.

Nick started working as a lawyer after graduating from the university. He has not shared much about his academic and education qualifications. Khan stopped practicing law and launched ICM Partners' ( International Creative Management) sports media department in 2006. After working with the company for six years and reaching the pinnacle of success in a short time, Khan joined Creative Artist Agency.

Nick climbed success stairs one after another and became the co-head of the CAA. He led the company's revenue to increase to 3 folds. In August 2020, WWE hired Khan as their president and Chief Revenue Officer replacing Vince McMahon. He has already shown his report by increasing the company revenue and other growths.