Marriages lasting more than a decade are somewhat of a unicorn in the entertainment and sports industries. Still, Russell Wilson and his wife Ciara managed to silence the ney sayers with their long and beautiful married life. Wilson and Ciara started their relationship in 2015 while Ciara was getting over her ex-fiance, a little rapper known as Future. And like his wife, Russell was getting over his ex-partner, his first wife.

Over the years, Wilson gained much fame from his career in the NFL. And Russell's passion for American Football started in his early high school career. And as of 2022, he joined the Denver Broncos on March 16th. With his long career in the NFL, Wilson earned over a million as his net worth.

Although Russell Wilson tied the knot twice now, his second spouse appears to be the life partner he wants. And currently, Wilson and his loving wife, Ciara Princess Wilson, née Harris, live a life akin to a romance movie. 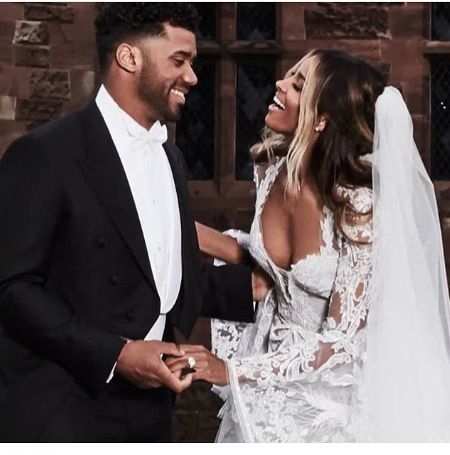 Ciara was to marry the famous rapper Future. But, the singer and Nayvadius DeMun Wilburn, Future, ended their relationship when Harris found out Wilburn cheated on her. In her relationship with Nayvadius, she gave birth to a son, Future Zahir Wilburn, on May 19th, 2014.

While working on herself and finding closure, Caira eventually met Russell. And by early 2015, Wilson and Harris started their romance journey. Like his now-wife, Caira, the NFL athlete was on his self-healing journey when he met his wife-to-be.

As the saying goes, when you know, you know; Russell wasted no time and proposed to the singer on March 11th, 2016. Only a year after the start of their relationship Wilson knew he wanted Caira as his wife. So, on July 6th, 2016, Russell and Caira became husband and wife. Likewise, the NFL star and his wife exchanged their holy vows at Peckforton Castle, Cheshire, England.

Russell Wilson is a father to two kids and one stepson!

Russell Wilson and his wife, Ciara Princess Wilson, gave birth to two children. Wilson fathered a son and a daughter with Ciara. Likewise, he helps his spouse take care of his wife's child with her ex-fiance, Future. 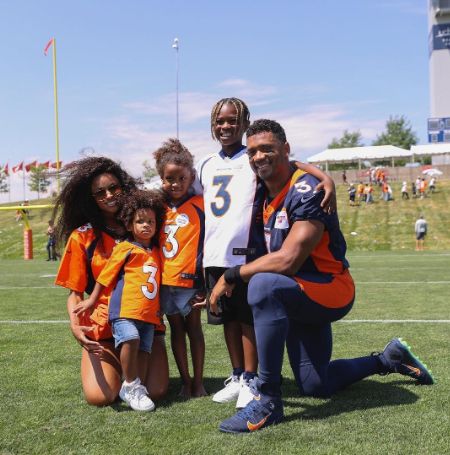 Russell Wilson and Ciara posed for a picture with their kids on the football field. SOURCE: [email protected]

Wilsons welcomed their first child a year after the married couple exchanged their vows. On April 28th, 2017, Caira gave birth to Sienna Princess Wilson. And three years, the couple announced they were expecting another child in their married life. On July 23rd, 2020, Caira and Russell brought home their second child, a son Win Harrison Wilson.

Aside from his children with Ciara, Russell also takes care of Future Zahir Wilburn with his wife. And the NFL athlete and his stepson share a healthy relationship. Wilson took his spouse's firstborn under his wings and is very close with the child. The kids were a blessing for the Wilsons, as they kept the duo from drifting apart. And as such, Ciara and her husband became even more intimate in their relationship.

Russell and his first wife were married for two years and then filed for divorce.

Russell Wilson and his first wife, Ashton Meem, married on January 14, 2012. Likewise, the NFL superstar and his then-wife exchanged vows at the Country Club of Virginia. And their big day was a big celebration for the ex-married couples. No expenses were spared during their celebration, but Wilson and Meem would not share the relationship for a lifetime as they promised in their vows. Ashton and Russell called it quits after two years of wedlock. In April of 2014, the NFL athlete would annouce his and his partner's decision to divorce.

After the divorce, many fans started pointing fingers at the couple. Some tried to blame Russell, while the majority believed the rumors of Meem cheating on the quarterback. And according to the said rumors, Ashton and Golden Tate had an affair. After months Tate finally addressed the news stating it was false and damaging his and Meem's reputation.

During this whole ordeal, Wilson stayed out of the limelight. And the following year after the divorce, he met his soul mate, Caira Princess Wilson. Caira and her husband successfully lead seven years of marriage without any scandal. Likewise, the Wilsons keep themselves away from any nasty rumors. As such, no news or stories about the married power couple facing any marital problem have come to light.